Agents in the Greater China region continue to look most favourably to the UK, but Canada and Singapore are also of increasing interest

Coming from countries that have handled the pandemic very well, agents in the Greater China region have high expectations of what destination governments should achieve

It is well recognised just how well China and countries in that region have managed the public health and economic challenges of COVID-19. From developing and deploying its own vaccine, to altogether avoiding a recession, China achieved an admirable result in 2020 and 2021 looks to be no different.

It is only appropriate that agents in this region hold high expectations when it comes to their assessment of a government’s handling of the pandemic. In the March 2021 survey, there was a strong divergence in the assessment of the USA’s handling of the pandemic at 20% and Singapore at the other extreme of 70%. Other strong performers include Canada and Australia (65% and 60% respectively).

On this measure, there is not a large distinction between the performance of Australia (54%) and the United Kingdom (46%). This is puzzling given the two countries have had very divergent public health approaches and outcomes during COVID-19, but it is likely that while the UK failed to manage case counts, it is now making up for it with a stellar vaccination program.

Fig 2.1: “Over the past two months, the way this country’s government has handled coronavirus has made it a more attractive study destination.” 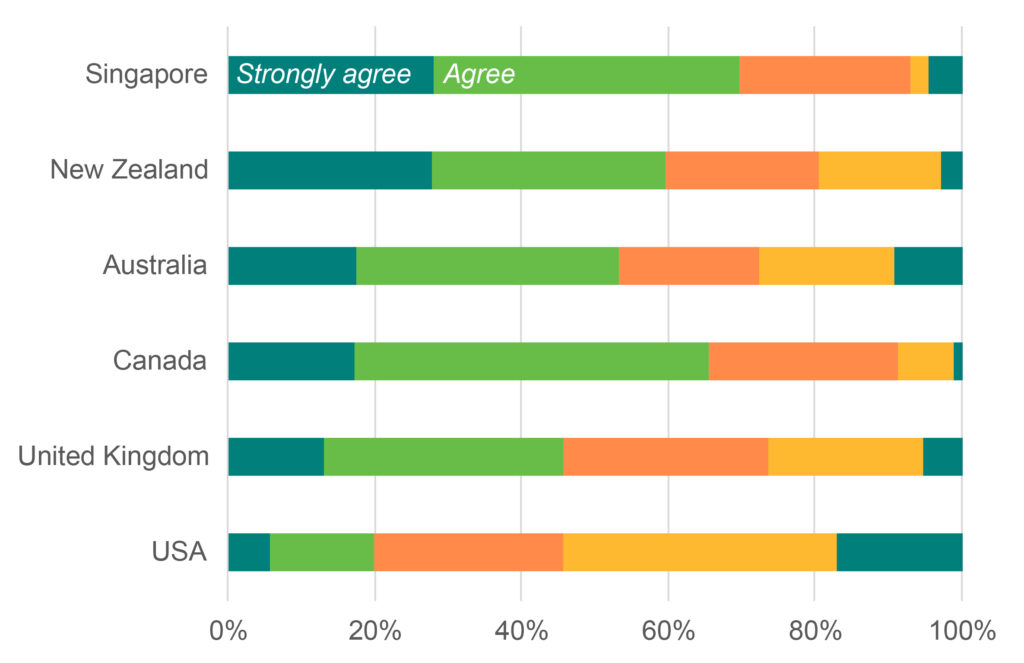 Neither the UK nor the USA are seen as safe and stable, yet interest in the UK remains the strongest of all destinations

Most countries are rated as ‘safe and stable’ with the exception of the United Kingdom (47%) and the United States (18%). Given how safe it is back home, and the high importance placed on safety, one would expect that these low scores for the UK and the USA would result in significant lower interest in those countries as study destinations.

This is certainly true for the USA, where the proportion of agents that agree/strongly agree there has been more interest is just 31%. The UK on the other hand continues to be most appealing in the eyes of agents in the Greater China region, scoring a chart-topping 78%.

The silver lining for Australia is the fact that its relatively low score on safety and stability does not appear to have dampened interest too severely, with the proportion of agents reporting interest in studying in Australia being sustained at 53%. It remains to be seen how long this is likely to continue.  According to Kim Eklund, Navitas’ Regional Sales Director based in Shanghai, Australia is gradually losing its historical advantages on the ground. For example, many agents have done away with their Australia only desks/departments. Consistent with our analysis of what agents are recommending there is clear evidence that Chinese agents all but insist that students apply to another destination, and for the time being, the UK provides the best hedge.

Fig 2.2: “Over the past two months, there has been more interest in this country as an education destination compared to other countries.” 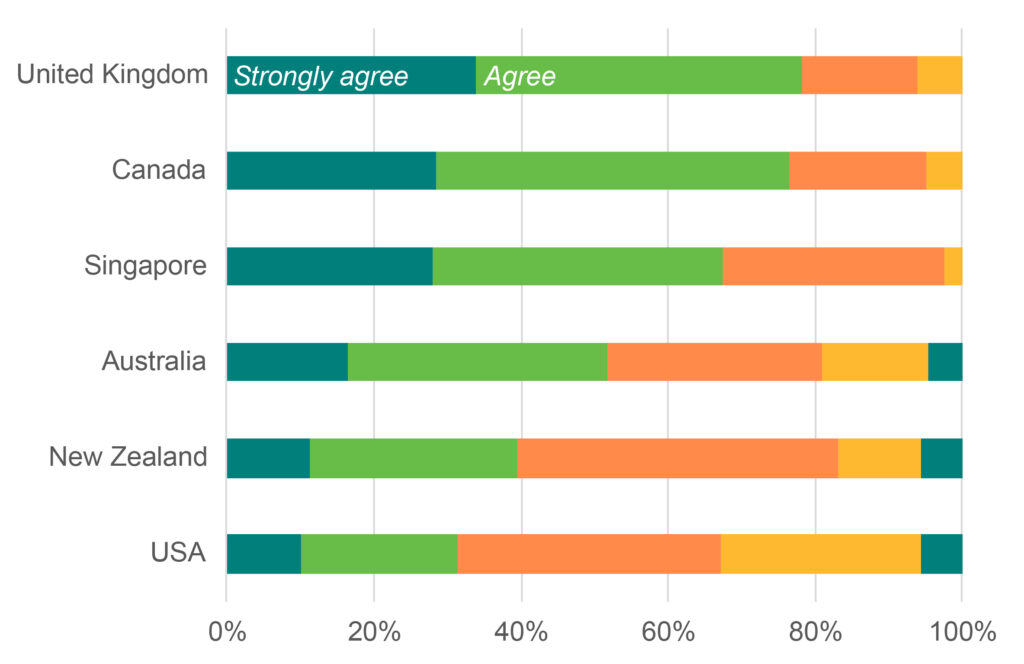 The UK’s March 2021 results further build on its strong performance in our last survey. One explanation for this sustained positive performance is the perception of the UK as being open and welcoming (75% agree/strongly agree). Agents in the Greater China region are not especially optimistic about the ability to travel to the UK, but nonetheless see a significant difference in how open and welcoming the UK is compared to Australia (38%) and the USA (39%).

The fact that Australia and the USA are now neck and neck reflects the opposing fortunes of those study destinations – the further decline in perceptions of Australia and the start of a dramatic recovery for the USA. It is unlikely these two countries will stay on par for long. While borders remain closed in Australia we can expect to see a further decline in ratings on this measure, and the two big announcements from the Biden administration in recent weeks – allowing Chinese students to travel and reopening visa processing – will undoubtedly put the USA further ahead.

“If the long lines snaking around the outside of the consulate are any indication, there is pent up demand in China for the USA.”
Kim Eklund, Regional Sales Director, Greater China and North Asia

The positive perceptions of the UK’s handling of the pandemic, and its reputation for being ‘open and welcoming’ translate into increased interest in the country as a study destination. However, while agents in the Greater China region reported substantial interest in the UK in the September 2020 survey (92%), by the time of this latest survey in March 2021 its result had fallen (78%), and Canada (77%) and Singapore (67%) have entered the fray (see Fig 2.2).

Canada and Singapore perform well on all indicators in the survey, including the all-important ‘open and welcoming’ measure (with 75% and 67% agree/strongly agree respectively).

Fig 2.3: “Over the past two months, the reputation of this country as open and welcoming for international students has improved.” 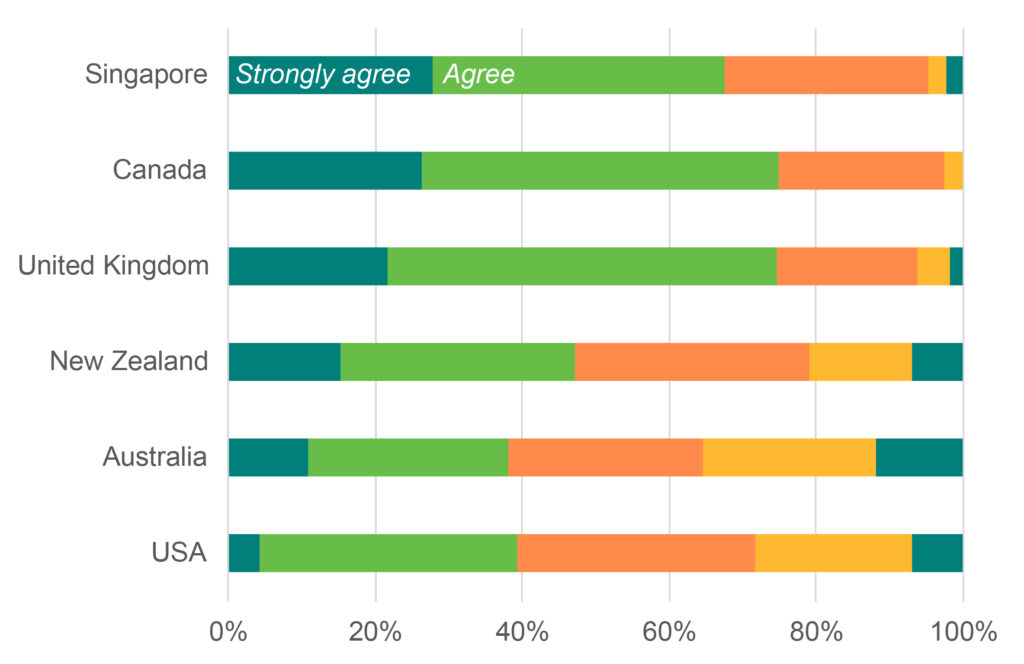 Even since the survey was completed, subsequent policy decisions will increase the appeal of the USA

The level of optimism about travelling to the USA in the second half of this year is lowest amongst agents from the Greater China region. At just 7%, agents there put the United States in the same low prospect category as Australia (6%) and New Zealand (8%).

There is strong scepticism about when Australia and New Zealand will re-open their borders. Even when looking ahead to the first half of 2022, only 20% of agents from China have confidence (almost certain) that students will be able to travel to Australia. However, since this survey was in the field, the USA has provided certainty that F1 visa holders will be able to travel to study from 1 August, notwithstanding the ability to get a visa and flights in the next few months.

Fig 2.4: Do you expect students to be able to travel to the following destination countries in the second half of 2021? 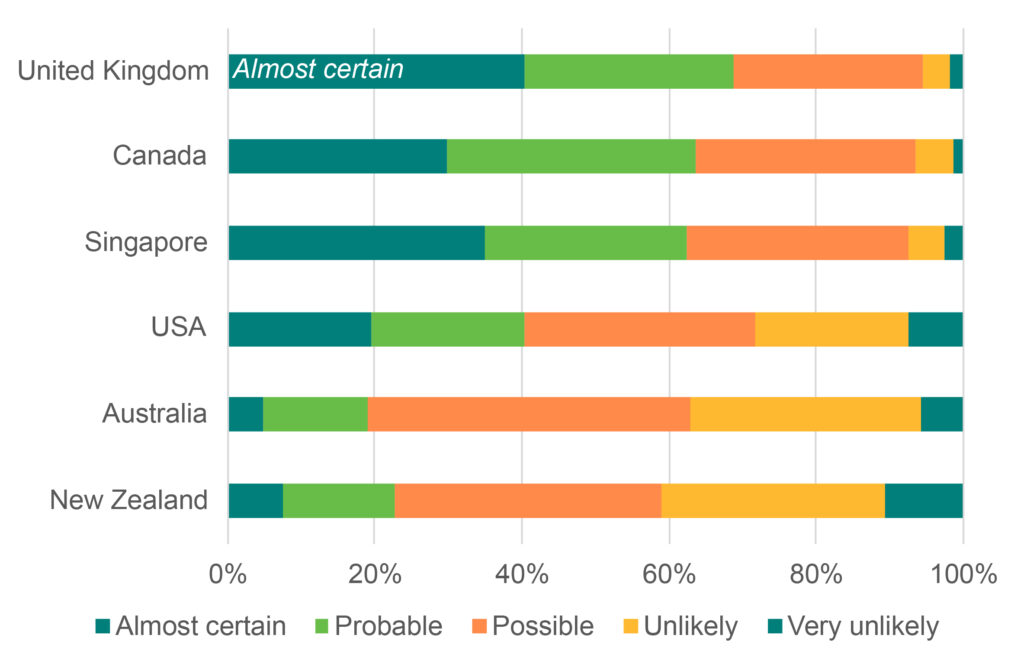 Consistent with the prior survey results, agents in the Greater China region continue to report that they expect outbound student flows to recover to pre-pandemic levels in 2021. In light, of the strong positive sentiment shown towards the United Kingdom, Canada, and Singapore discussed above, it would appear that these countries are best placed to respond to this recovery from the region.

Agents anticipate growth in 2022. Given that China itself is by far the largest source country for international students (with approximately one million students studying abroad in a given year), an increase of 10-15% in 2022 represents a sizeable increase in student flows.

That being said, the growth anticipated in the Greater China region is not as strong as the growth anticipated in South Asia (30-40% in 2022) or South East Asia (20-30%). This may suggest that the level of pent-up demand isn’t as strong for the Greater China region. According to Kim Eklund,  students unable to travel have not been waiting on the sidelines. They have more likely found domestic options through the expansion of places at local universities, or pursued regional alternatives including regional study hubs like Hong Kong, Singapore, Japan, Korea, and possibly even Malaysia. Students in China have also shown to be more accepting of online alternatives. 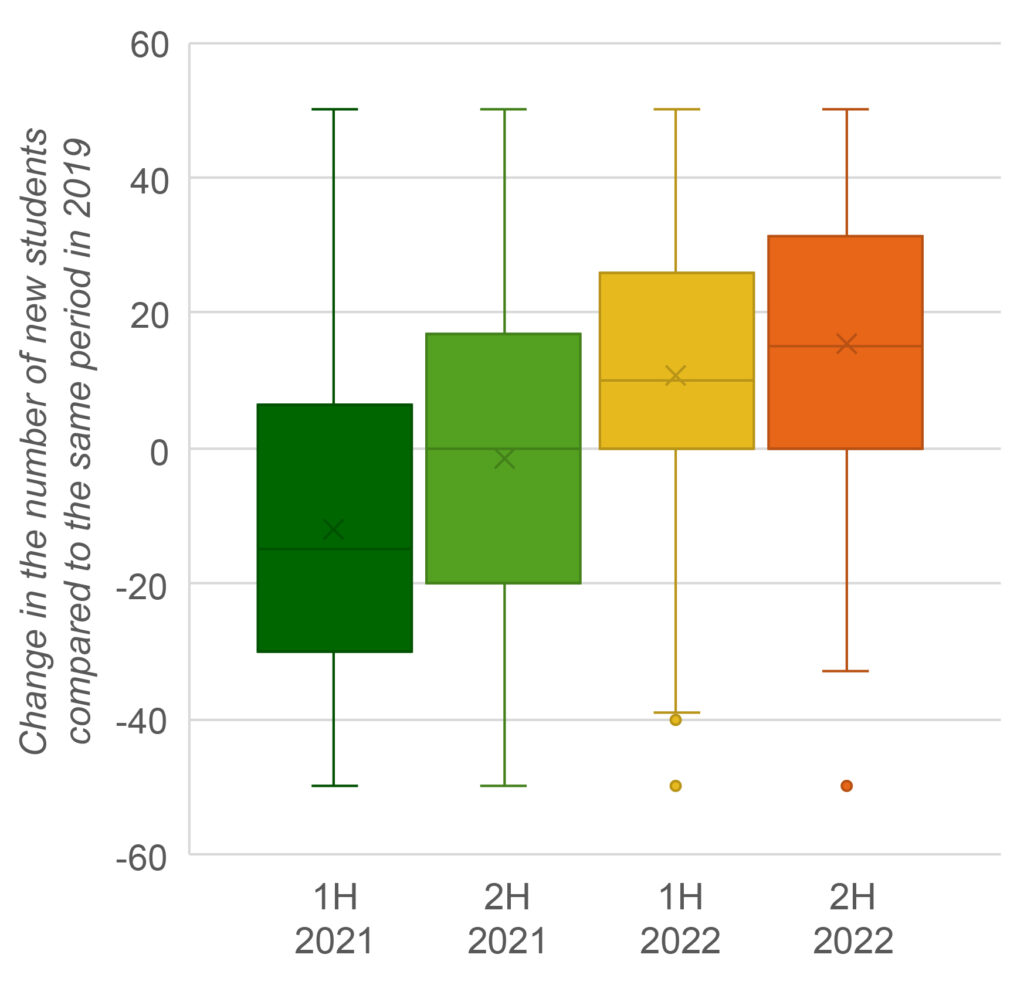 About The Author Kim Eklund

In contrast to other countries, COVID-19 case numbers still matter