It is clear that Australia and New Zealand continue to maintain a hard stance against international arrivals. Politicians and the community in both countries remain sensitive to any cases of community transmission of the disease.

In a recent address by the Australian Minister for Education, it was made clear that with the COVID-19 vaccine being rolled out, the Australian government is “increasingly hopeful that student arrivals in larger numbers will occur by Semester 1 of next year.”

In considering proposals for the return of international students, the New Zealand Education Minister has said that, “The reality is it’s just not possible to do that without significantly increasing the risk.” Like his Australian counterpart, his message for the sector is “2022’s looking better than 2021.”

As the following figure shows, a fulsome border re-opening and resumption of international student flows are contingent on a number of key factors.

In the case of Canada, the vaccine rollout has faced various supply-side obstacles but is already starting to pick up pace. As outlined above there are a number of issues that remain around visa processing and quarantine confusion, but there is still a realistic window of opportunity for Canada to get its ducks in a row in time for a possible recovery in the fall of 2021. The demand is certainly there.

Notwithstanding its early mishandling of COVID and its severe second wave, the UK’s rapid vaccine roll-out, recent track record for visa processing, and mostly open borders throughout 2020 makes a 2021 recovery very likely.

Agents now see little prospect for travel to Australia and New Zealand in 2021, and are reticent about prospects for early 2022

Agents have all but written off the southern hemisphere’s academic year. In response to the question, “Do you expect students to be able to travel to the following destination countries in the second half of 2021?” respondents to the Navitas agent survey are pessimistic. Just 4% consider it almost certain that travel to either Australia or New Zealand will be possible in the second half of 2021.

In contrast, ten times as many agents would consider it almost certain that students would be able to travel to Canada (39%) or the UK (45%). Our research indicates that the start of the northern hemisphere’s academic year in August/September 2020 will be very strong.

Figure 5.2: Do you expect students to be able to travel to the following destination countries in the second half of 2021/first half of 2022? 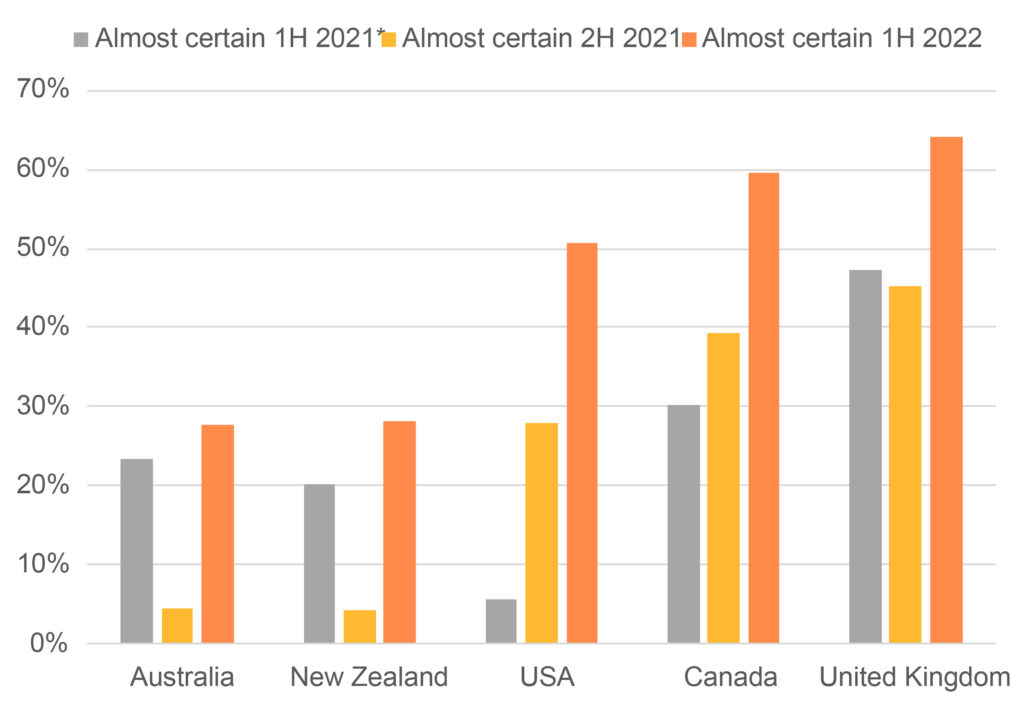 In the race to recruit international students in 2021, there are leaders, contenders and laggards – with Australia and New Zealand firmly in the latter category

When asked whether there has been more interest in particular countries compared to other countries in the last two months, the responses from almost 900 agents provide a clear delineation between three distinct categories.

First, the UK, Canada and the USA represent the market leaders. Agents were reporting increased interest in these study destinations in September 2020, and have reported even more interest in March 2021, with the USA being notable for the very large jump between recent surveys. Agents are now reporting more interest in the USA than in either Australia or New Zealand.

Third, Australia and New Zealand are the clear laggards. Not only is the level of interest being reported lower than other study destinations, but these are the only two countries that have shown a decline on this indicator since the September survey.

Figure 5.3: “Over the past two months, there has been more interest in this country as an education destination compared to other countries.” Agree/strongly agree 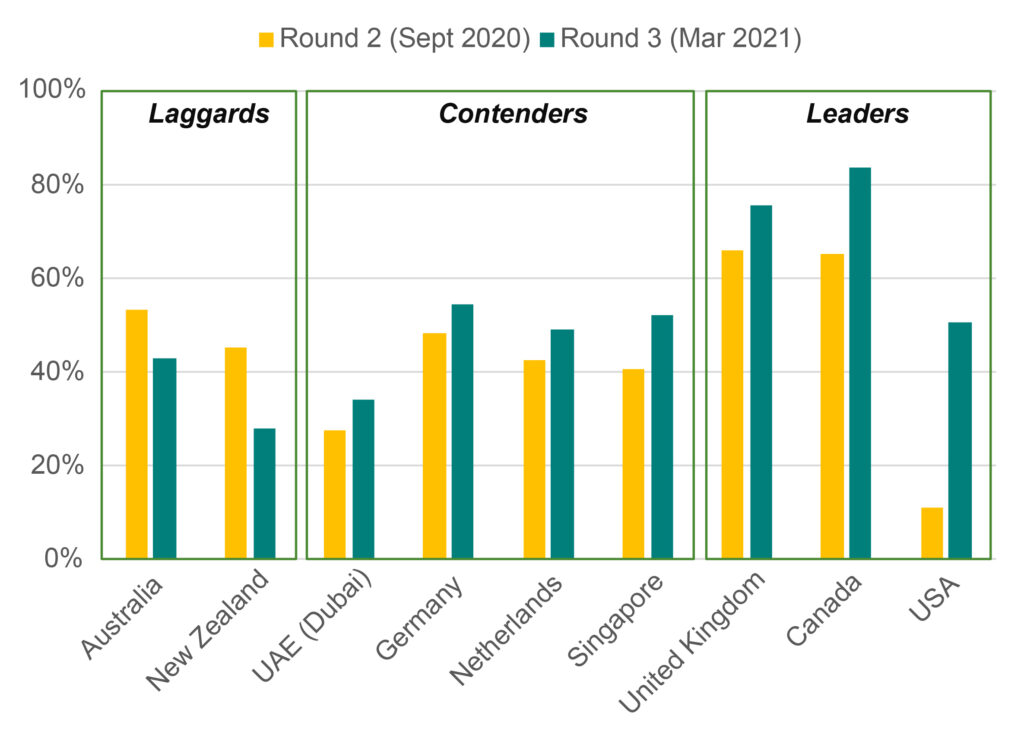 Many industries are looking forward to a strong recovery in 2021, especially as billions of doses of vaccines are deployed to protect the most vulnerable populations around the world. The international education sector could very well form part of the economic recovery. At this stage it looks likely that whatever rebound in global student flows might eventuate in the coming months, Australia and New Zealand will be spectators and not beneficiaries.

Look out for the second part of this report from our most recent agent survey, which considers regional perspectives on study destinations and anticipated recovery in student mobility.

About The Author Bev Hudson

Bev has been working in international education for thirty years in four countries. Prior to becoming CEO of University Partnerships, Australasia in July 2018, she was working for Navitas in North America for 12 years across a number of roles including: College Director and Principal at Navitas’ first pathway program in North America; Fraser International College; General Manager for Navitas Canada and as President and CEO of University Partnerships, North America. Her current responsibility is to manage all University Partnerships operations in Australasia as well as being responsible for determining the strategic direction of the division, overseeing the learning and teaching direction to ensure the quality of delivery and strong student outcomes. Bev has been involved in all aspects of international education including curriculum design, student services, faculty and administration. She has developed and implemented the strategic vision for internationalisation at several universities including internationalising the curriculum, international recruitment and marketing, student support, and international partnership development. Bev received her Master of Education from Edith Cowan University. In 2014, she was awarded the International Education Distinguished Leadership Award from the British Columbia Council for International Education.