The most recent Navitas Agent Perception survey found that preferences of students in the South East Asia region are either similar to those in South Asia (e.g. importance of PSWR, affordability), or closely aligned with those from Greater China (e.g. importance of COVID-19 cases, interest in Singapore as a destination).

Like South Asia, agents from this region predominantly cite the ability to travel, access to post-study work rights, and cost of study as factors influencing destination choice, with 65-70% agents mentioning each of these. However, there was less consensus amongst agents from South East Asia compared to other regions, where ~80% or more agents agreed on at least one of the factors.

Though not one of the “Top 5” most-cited reasoned, COVID-19 cases/restrictions are still an important decision factor for South East Asia – as many as 40% of agents mentioned it as a consideration factor, higher than the share for South Asia, Americas and Sub-Saharan Africa. This aligns more closely with sentiment in the Greater China region and supports anecdotal evidence from our teams in market that parents are looking for reassurance around measures taken to keep students safe from Covid when overseas.

Tim Tabaka, Regional Sales Director for South East Asia says, while most SEA countries are learning to live with COVID, many parents across the region are still averse to sending their children to study abroad.

“Despite vaccination levels being high across UK, Australia, Canada and the US, cases of the Omicron variant have also increased dramatically. As a result, some parents are willing to wait and see how things go and how health care systems are coping, before they have confidence in sending their children abroad to study.” 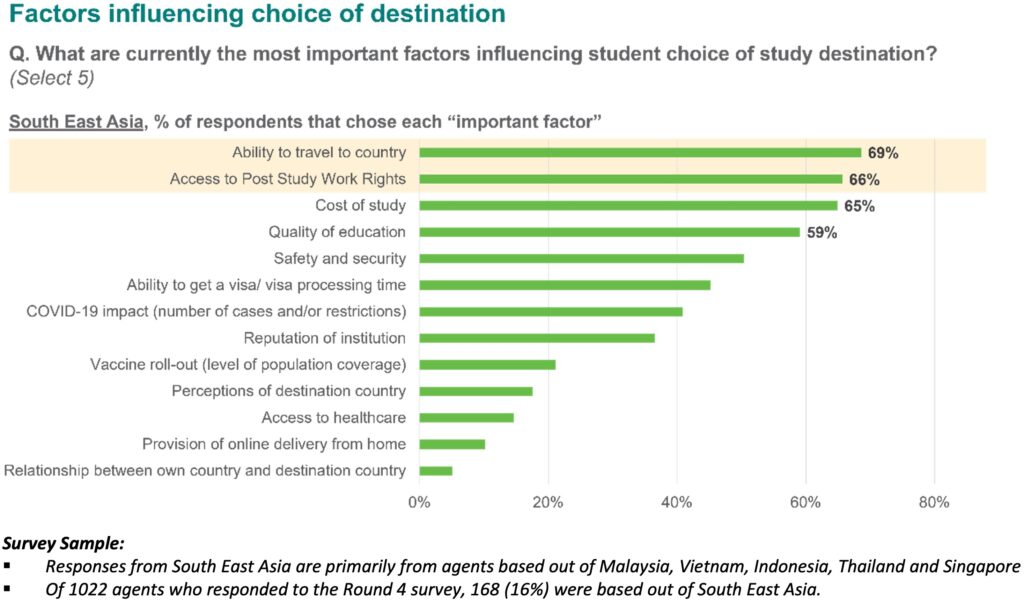 Our agent perception research has tracked a significant decline in the standing of Australia as an education since the start of the pandemic, as prolonged border closures have made travel to Australia impossible. In the latest findings, South East Asia is the only region where Australia still ranks in the top 1-2 amongst the major destinations; in most other regions, the UK and Canada hold these positions.

For agents in South East Asia, Australia and the UK appear to have a slight edge and are both at similar levels – around half of agents believe the UK and Australia are “very attractive”. 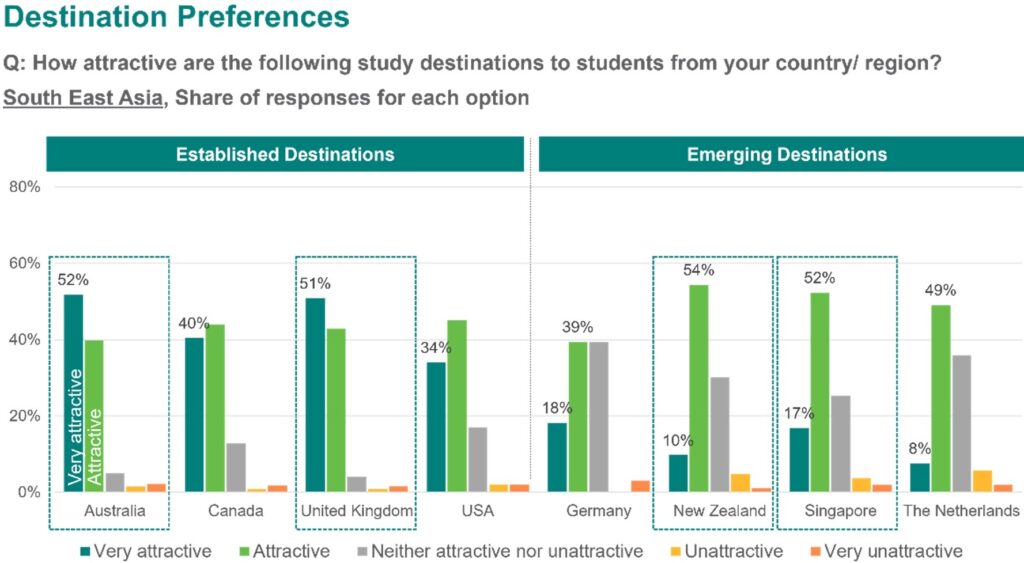 “Australia’s continued appeal across the SEA region is based on many factors: its proximity, time zones, safety, lifestyle, favourable post-study work rights, and education standards which are still highly regarded across Southeast Asia. In particular, there is a strong sense of connection that has been established, with large and thriving diaspora communities from Indonesia, Malaysia, Singapore and Vietnam.”
Tim Tabaka, Regional Sales Director, South East Asia (Navitas)

Amongst the emerging destinations, Singapore and New Zealand appear to have a slight edge over Germany and the Netherlands for agents in South East Asia. Compared to other regions, however, the attractiveness scores here are more balanced with no standout “winners”.

In Southeast Asia the COVID strategy adopted by the Singapore government throughout the pandemic has been highly regarded. The low number of cases and associated deaths in what is the third-most densely populated country in the world has made Singapore a shining light. Coupled with more affordable study options than Australia, New Zealand, the UK, EU, US and Canada, fast-track study options, and of course proximity have made Singapore an increasingly desirable option for students from the region.

COVID-19 is not influencing student choices