As we demonstrated in the last piece in this series, three quarters or more of the agents we surveyed agree that the Australian, New Zealand and Canadian government’s handling of the coronavirus have made them more attractive study destinations. In contrast, less than a third of agents think that the UK government’s handling of the coronavirus has made it a more attractive study destination. The United States has done especially poorly on this measure.

The key question arising from the recent Navitas agent research is one of significance – Does a country’s handling of the pandemic and its safe and welcoming reputation have the potential to influence student behaviour and decision-making in their choice of study destination? Do such sentiments matter?

Agents are uncertain (with a higher proportion of Neither Agree nor Disagree) but the patterns persist – between 55-60 per cent of agents report a very recent uptick in student interest in Canada, New Zealand and Australia compared to other countries. 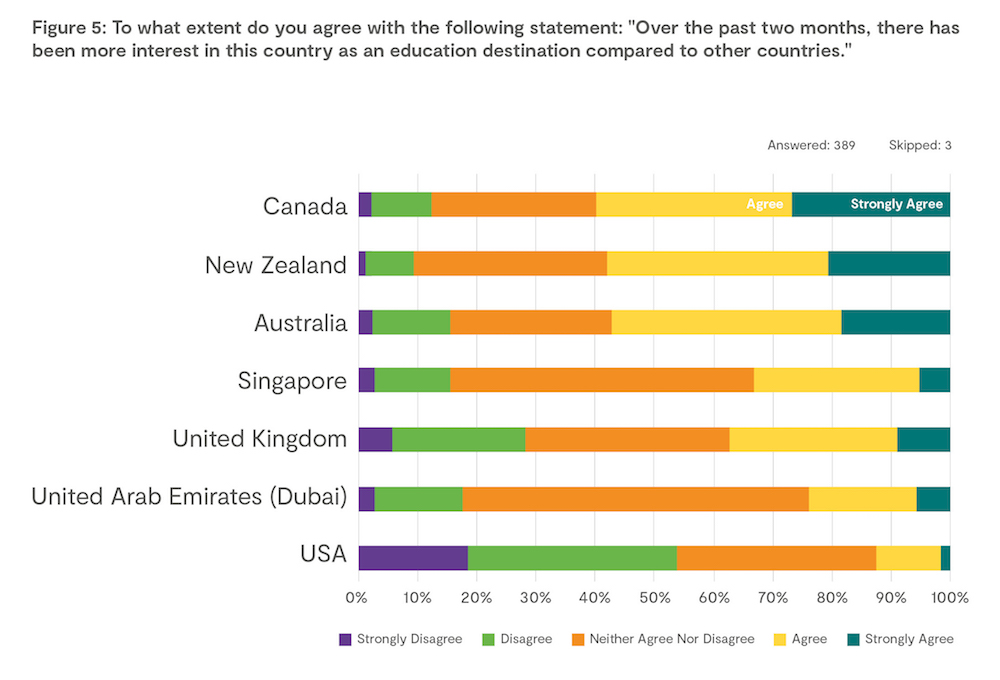 We asked our network of education agents to push their assessments one step further: How would this uptick in interest translate into shifts in market share?

Before we get into the responses, we need a rough summary of the global international education market as it was in the halcyon days of 2019. 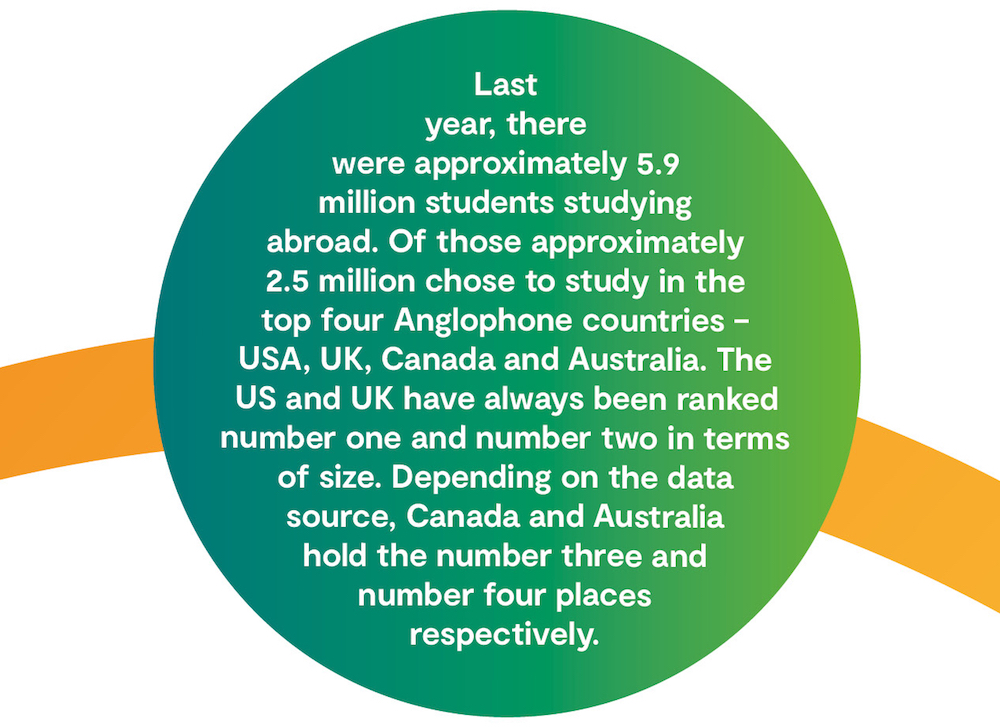 Based on the responses from the agents surveyed by Navitas, we can contemplate the proportion of the market comprising students who have no firm choice of destination as yet due to COVID-19.

Approximately one in five agents surveyed were moderately uncertain– expecting that up to 10 per cent of the students they work with were as yet undecided as to where they will go to study. A further one in five agents surveyed were highly uncertain– indicating that in their estimation more than 10 per cent of market share could not be allocated at the present time. Some agents reported market share uncertainty being as high as 50 per cent.

Using a proportion of 10 per cent and 20 per cent of market share being ‘not yet committed’, the following table illustrates how substantial this is, even in a shrinking market. Even in the worst-case scenario — whereby the overall pie shrinks by 40 per cent — 2020 or 2021 could see 150,000 to 300,000 students uncommitted to any particular destination. This is equivalent to two and half to five times the total number of international higher education enrolments of New Zealand being effectively not yet committed. 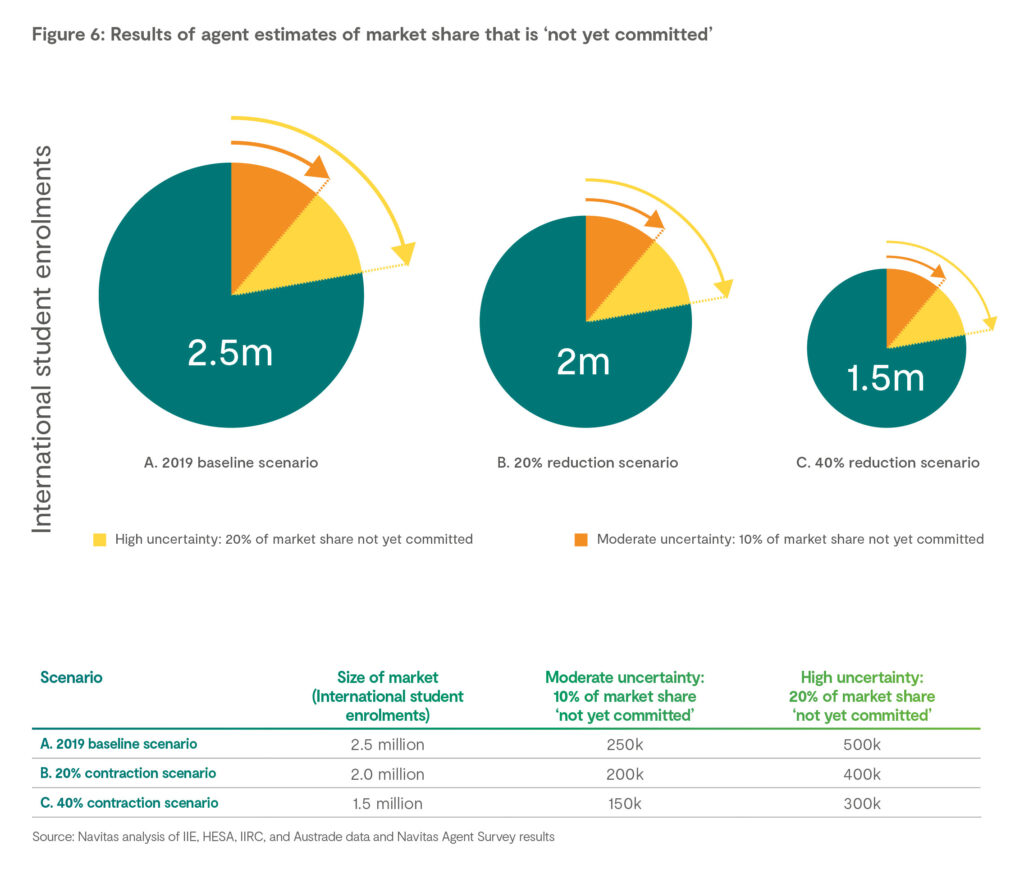 About three in five agents were able to offer a view of the likely shift in market share with a seemingly high degree of confidence. These agents tended to report a large increase in Canada’s market share, and a marked decline in the market share of the US.

Interestingly, these agents predict a slight decline in Australia’s market share and a slight increase in the UK’s market share, contrary to the sentiment expressed in response to other questions, whereby Australia is typically viewed more favourably than the UK. There are three possible reasons for why agents in aggregate assumed that the UK would gain market share while Australia would lose market share.

The following table outlines what the aggregated responses from our agent survey means in terms of market shares post-COVID19 as compared to pre-COVID19. As the figures show, agents are predicting a large fall the US’s market share from 44 per cent to 37 per cent, while Canada is expected to increase its share from 19 per cent to 21 per cent. The UK and Australia gain 1 percentage point and lose 1 percentage point respectively. 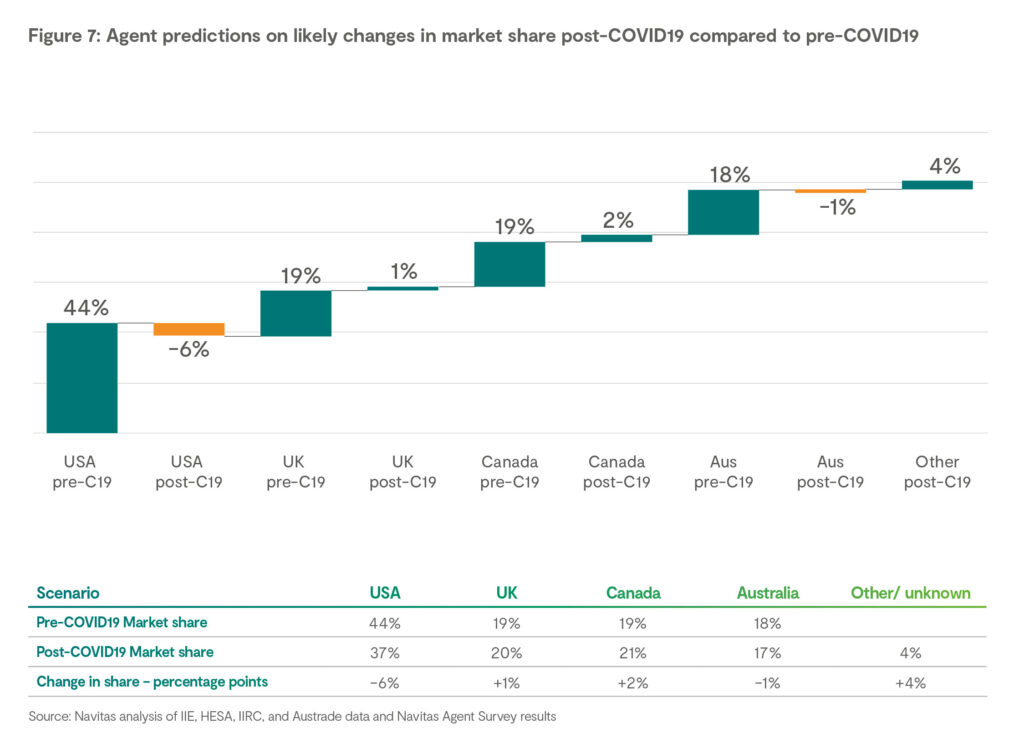 Using the high-level scenarios of a 20 per cent reduction in the overall market presented in the previous section, the following table translates these shifts in market share into numbers of enrolments. A shift in market share outlined above applied to the total market of 2.5 million students results in a large gain for Canada of 55,000 additional students, while USA loses up to 160,000 international students.

In the more likely scenario that the global pie shrinks to two million students, all countries are facing a reduction in enrolments but the fall for Canada is relatively small at minus 52,000 students, while the fall for USA is extremely large at minus 350,000 students.

The third point currently appears unlikely — it is very difficult for any one country to achieve rapid shifts in market share. Analysis undertaken by Nous and Navitas has shown that shifts in market share are often the result of ‘own goals’. For example, the gains in market share by Canada and Australia since 2012 were driven at least in part by the UK’s removal of post-study work rights. 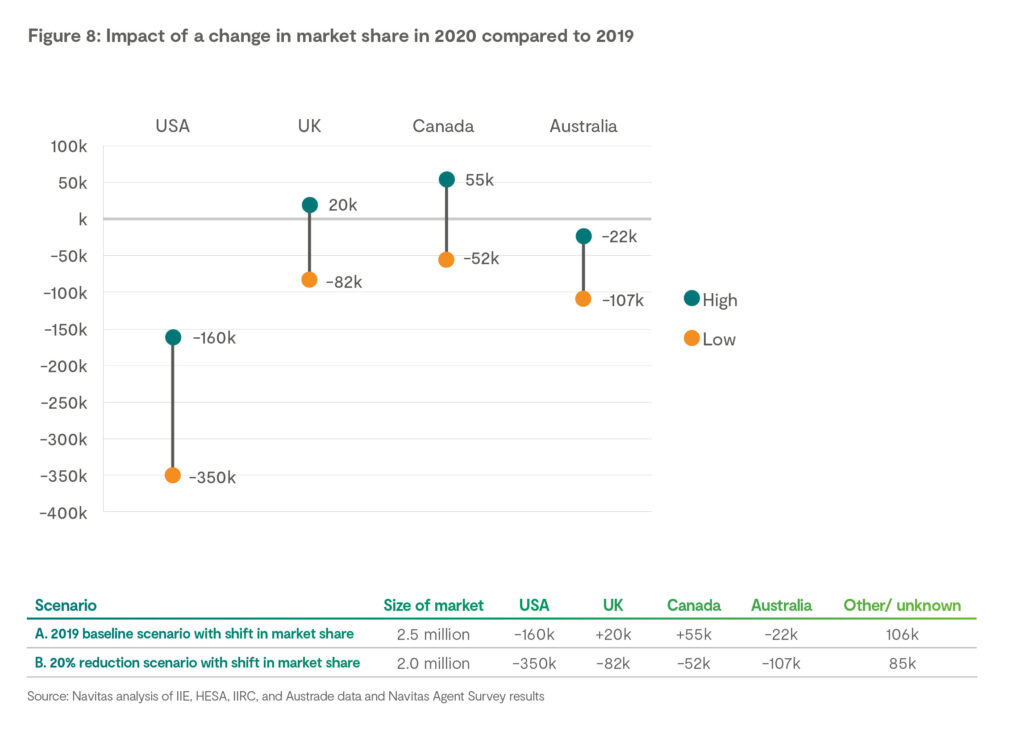 These estimates were based on a pair of questions that we posed to agents as follows:

The survey made it clear that we were asking for an assessment of all students, not just Navitas students. A key strength of the question was the focus on the agents’ own clientele, not the wider market.

If the theory of the wisdom of crowds holds true, then the responses of almost 400 agents from 63 countries should carry some weight. These estimates may not appear especially scientific, but they are in fact based on the aggregated expert opinion of a diverse, independent, decentralised and trust-worthy crowd.

This analysis indicates just how important it is for a destination country to successfully navigate the dual public health and economic crises. In addition, it will be the attractiveness of each destination’s international education policy settings and their investment their national brands that will determine where those large numbers of ‘not yet committed’ students choose to study.