Despite Brexit, the UK is relatively appealing to international students in Europe

Despite Brexit, the UK still appears relatively appealing to international students in Europe, but Canada may prove to be a surprise alternative

Agents in Europe rate the Canadian and UK government’s COVID-19 performance rather highly. With respect to Canada, 58% agree/strongly agree that the government’s handling of the pandemic has made it a more attractive study destination. The UK however, is not far behind with 54% agreeing or strongly agreeing.

Consistent with our recent analysis which shows that perceptions of a country’s handling of a pandemic is increasingly decoupled from case counts, Australia in particular fares poorly on this measure (only 31% agree/strongly agree). Despite similar responses to the pandemic, Australia lags behind New Zealand, possibly because New Zealand’s handling of the crisis was a memorable, early and consistent good news story that was covered in global media. Coverage of Melbourne’s record-breaking lockdown may also linger.

Fig 5.1: “Over the past two months, the way this country’s government has handled coronavirus has made it a more attractive study destination.” 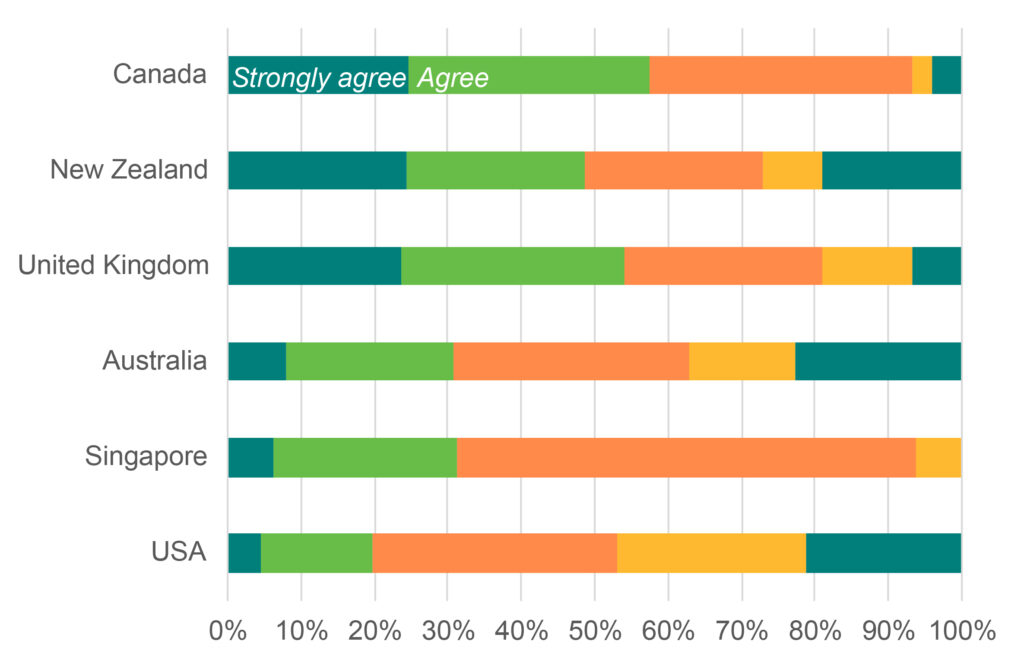 While this seems like a positive story for the UK, it should be understood in the context of Brexit. The number of students from Europe studying in the UK will decline as a result of Brexit making study options less affordable and accessible for students from the European Union. UK universities are trying to retain their market share with measures to improve affordability, but this may not be sufficient to offset the loss of the buy-now-pay-later financial model previously available to students from the European Union.

The international education landscape will undoubtedly change as a result, prompting the agent community to explore and even pre-empt the next education trend, whether this is studying locally, taking up programs at international branch campuses, or considering study destinations further afield. The UK has always been number one with most other countries being a distant second but could this be about to change?

Our findings suggest that Canada could provide an alternative to the United Kingdom for students looking to study overseas at an English-speaking university. The strong score for Canada on the government’s handling is underpinned by very positive views on how ‘safe and stable’ and how ‘open and welcoming’ it is perceived to be by Europe-based agents. Canada scores 64% agree/strongly agree on both counts. Canada is seen to be as ‘safe and stable’ as New Zealand (62%) and more safe and stable than Australia (51%). Canada is also seen to be more open and welcoming than the United Kingdom (54%).

Fig 5.2: “Over the past  two  months, the reputation of this country safe and stable for international students has improved.” 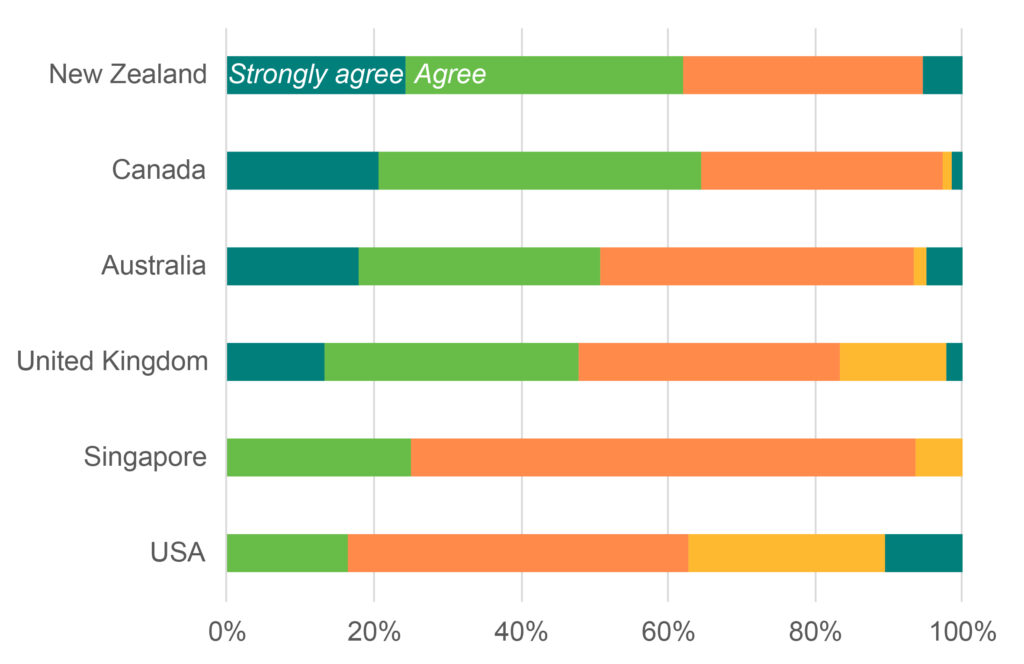 Fig 5.3: “Over the past  two  months, the reputation of this country open and welcoming for international students has improved.” 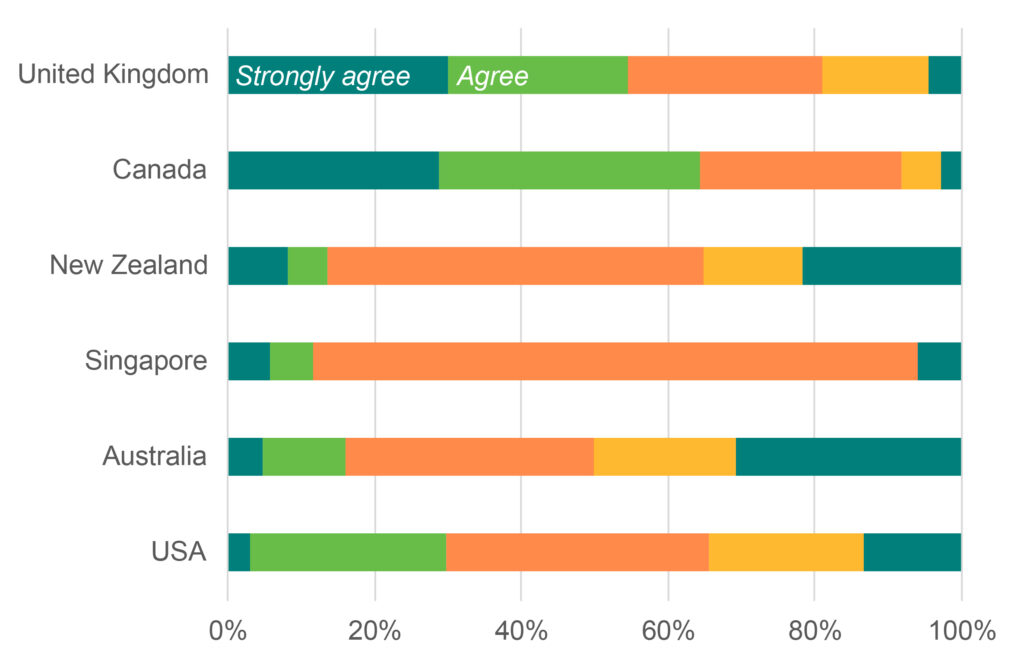 Canada is not typically seen as the destination of choice for students from Europe but in the current climate, it is presenting itself as a somewhat surprising alternative to the UK, USA and Australia. This is most apparent in responses to the question on whether there has been more interest in various destinations. Almost 80% of agents in Europe agree/strongly agree that Canada has been attracting more interest of late. As discussed above, the UK’s premier position as a destination for Europe continues to be sustained despite Brexit, with 60% agree/strongly agree on this measure.

It is interesting to note that the Netherlands (74% agree/strongly agree) is not far behind Canada, while Germany (57%) is close behind the UK. By contrast, the United States, Australia, Singapore and New Zealand are all lagging much further behind.

“While we should not expect the UK to fall off the radar, there is no doubt that Brexit has changed the international education landscape in Europe. Offerings in Germany and the Netherlands are starting to come into play but Canada’s star is really rising. Canada is friendly and welcoming and has handled the pandemic well. To many it has the appeal of the US without the politics, and the cost of fees is not at all prohibitive.”
Omid Honari, Regional Sales Director EMEA

Fig 5.4: “Over the past two months, there has been more interest in this country as an education destination compared to other countries.” 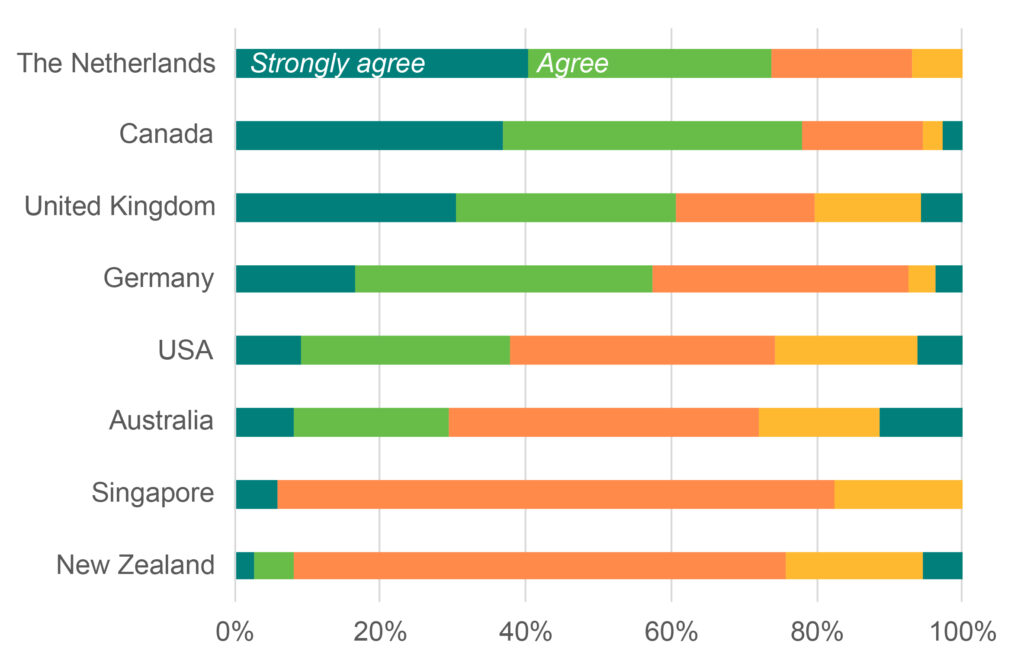