Perceptions of study destinations are changing as pandemic persists

Navitas research continues to track the evolving perceptions of agents in the continuing COVID-19 crisis.

In May 2020, Navitas asked its agents to reflect on the relationship between the handling of the coronavirus pandemic by different countries, and the extent to which this made a country a more attractive study destination.

There were two key findings from this research, which included responses from nearly 400 agents in 63 countries.

The first was the novelty of the question itself – no other research to-date has attempted to draw a connection between a government’s handling of the pandemic and destination attractiveness. As a result, our findings were picked up far and wide.

The second was the significant spread of views on this topic. New Zealand was far and away the leader with 85% agreeing or strongly agreeing that the Ardern government’s handling of the pandemic had made it a more attractive place to study.

The UK and United States on the other hand lagged far behind at 30% and 15% respectively.

In September 2020 Navitas repeated its research, seeking to understand how agent perceptions have evolved with the continuing COVID-19 crisis and what this might mean for international education in the short to medium term.

The latest agent survey, conducted in September, captured the perceptions of almost 300 education agents in 54 countries, and again sought to understand whether perceptions of a country’s handling of the pandemic impacts its reputation as an education destination.

The findings reveal that, on the whole, agents are less enthusiastic about how countries have handled the coronavirus pandemic over the last two months. For example, when agents were asked if the government’s handling of the pandemic had made a destination a more attractive place to study, New Zealand continues to lead the pack but with a rating of just 65% agree/strongly agree compared to 85% in May 2020. Canada is similarly doing well, albeit at 60% agree/strongly agree compared to 75% in May 2020.

It would appear that the way governments have handled the coronavirus is becoming less of a choice factor as the pandemic evolves. Possible explanations for this include:

The positive shift in perceptions of the UK may reflect the measures taken by the UK government to bring the virus under control and the increased freedoms enjoyed by the public over the summer. (Note that the agent survey was in the field in September prior to the more recent escalation in COVID-19 cases in the UK and on university campuses in particular.) Similarly, the decline in perceptions of the Australian and New Zealand governments’ handling of the pandemic may have been influenced by a second wave and further lockdowns in New Zealand and Victoria which have now stabilized.

The United States continues to lag far behind other Anglophone destinations on this measure and every other dimension.

As the world adjusts to a new normal, the twin factors of ‘safe and stable’ and ‘open and welcoming’ return to prominence

New Zealand and Canada have enjoyed an improving reputation as being safe and stable for international students, with 76% and 68% of agents respectively supporting this view. Hardly any agents (fewer than 3%) disagree with this sentiment.

Australia and the UK follow behind with a lower level of agreement (at 61% and 59% respectively), as well as a higher level of disagreement (at 15% and 17% respectively).  Agents’ perspectives on the USA continue to deteriorate with 63% of agents disagreeing that the USA has become more safe and stable for international students in the last two months. 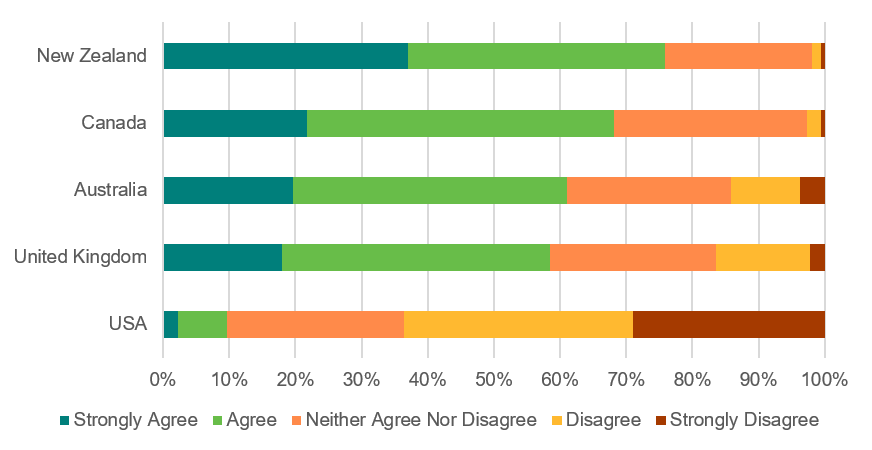 On the question of whether the reputation of countries as open and welcoming improved in the last two months, there is a substantially different story. On this measure the UK does markedly better than other destinations, including Canada, Australia and New Zealand. 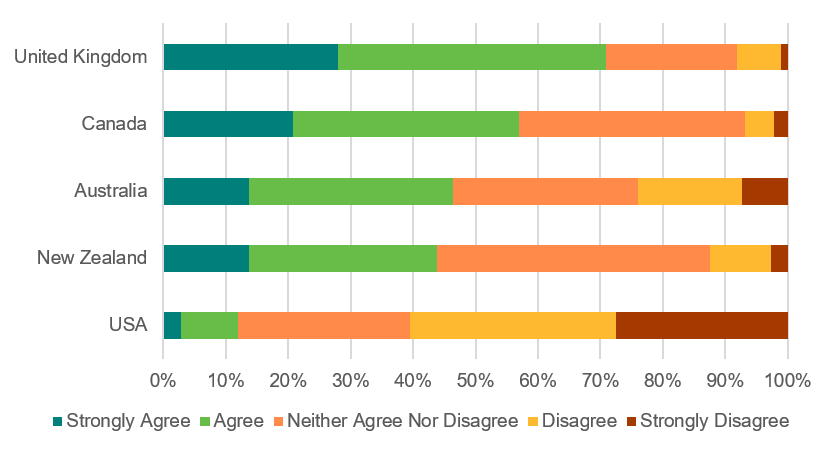 The September research demonstrates that countries can be perceived as more ‘safe and stable’, but at the same time less ‘open and welcoming’, with New Zealand being the prime example. The following figure provides a side-by-side comparison of agent ratings for both ‘safe and stable’ and ‘open and welcoming’. It is apparent that these two dimensions do not go hand in hand.

Figure 4: Proportion that agree/strongly agree that the reputation of a country as ‘safe and stable’ and ‘open and welcoming’ has improved in the last two months. 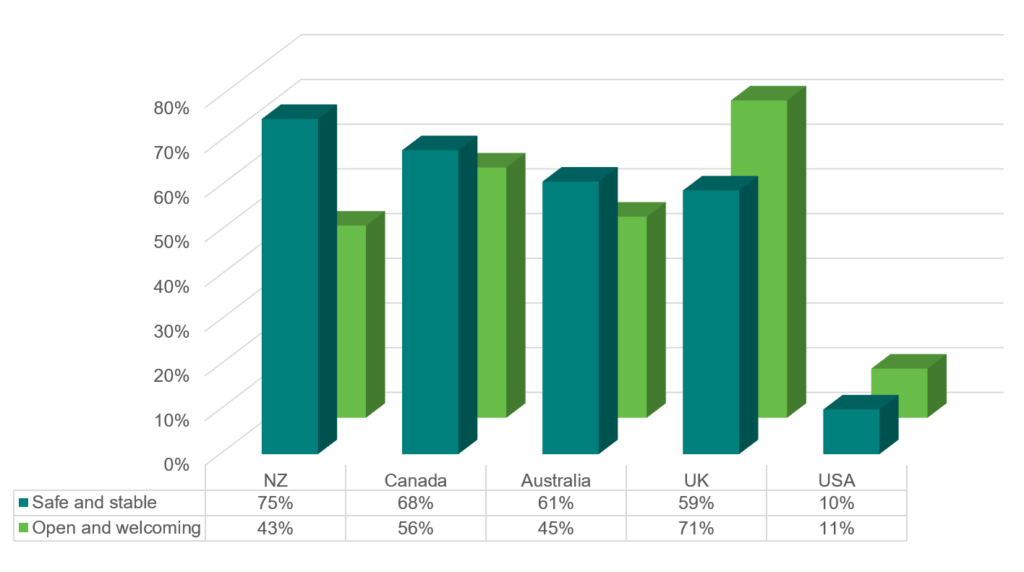 It is Navitas’ hypothesis that this discrepancy is likely the result of agents’ assessments and expectations around the ability of international students to access each destination. Taking the two responses for ‘safe and stable’ and ‘open and welcoming’ together, the UK, despite its relatively weak score on ‘safe and stable’ ranks the highest (59% + 71%) and the US languishes (10% + 11%). This would indicate that for agents, a country’s reputation as being ‘open and welcoming’ is currently more important than its reputation as being ‘safe and stable’ when it comes to its attractiveness as a study destination.

You may also be interested in what the findings tell us about the current appeal of the UK, Canada and Australia as international study destinations.

For insights from our first survey reported in July 2020, please see ‘How COVID-19 is changing the fortunes of international education destinations’ Part 1 and Part 2.