In contrast to other parts of the world, COVID-19 case numbers still matter in South East Asia

While agents from the Greater China region and South Asia have tended to show a strong bias towards the UK and Canada, this pattern is not as pronounced for agents in South East Asia.

Two-thirds of agents (67%) in South East Asia agree/strongly agree that the Australian government’s handling of the pandemic has made it a more attractive study destination. By comparison, only 49% of agents in South Asia and 53% of agents in Greater China would share the same view. Likewise, the New Zealand government’s response is also judged favourably. Crucially, this positive view of Australia and New Zealand puts these two countries on par with Canada and ahead of the UK on this measure.

Tim Tabaka, Regional Sales Director for Navitas in South East Asia summarises the general sentiment to international education in the region as being strongly focused on safety. For the agents, parents and students he’s interacted with, “Safety remains paramount – parents want their children close to home.”

Fig 4.1: “Over the past two months, the way this country’s government has handled coronavirus has made it a more attractive study destination.” 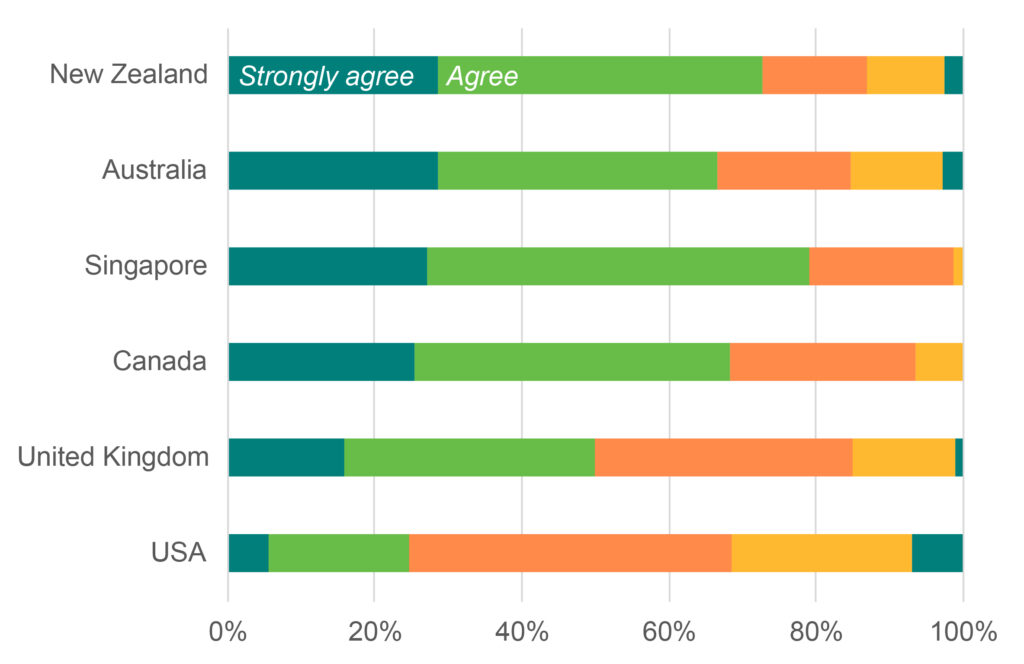 Fig 4.2: “Over the past  two  months, the reputation of this country safe and stable for international students has improved.” 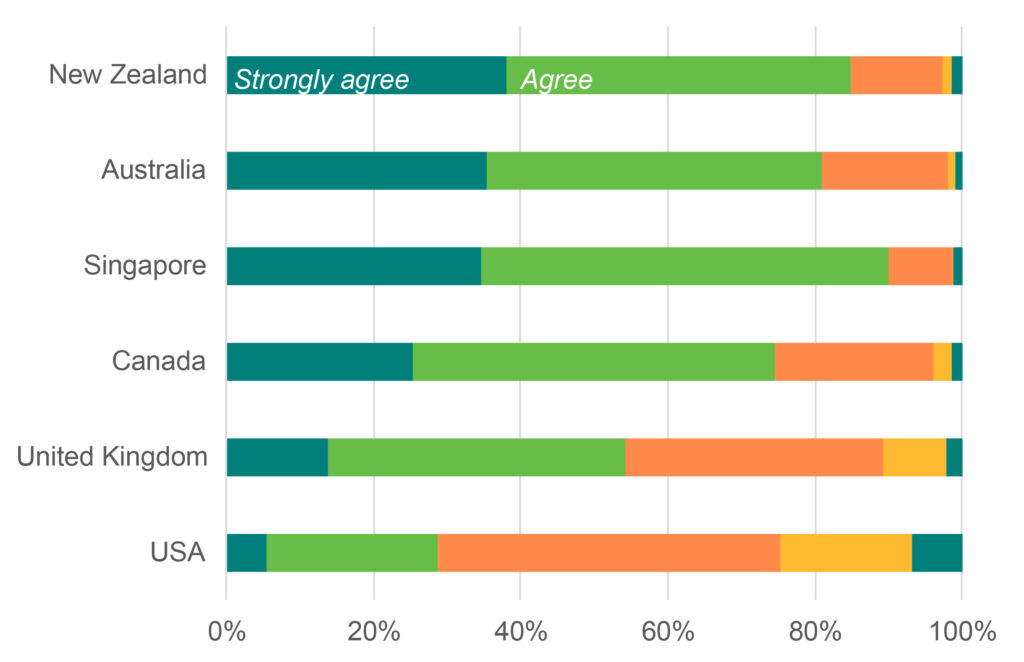 Agents in South East Asia also hold the most favourable views of Australia and New Zealand when it comes to their assessment of the likely ability to travel. The hard border closures mean that Australia and New Zealand still lag behind all other destinations, with only 10% reportedly ‘almost certain’ that students will be able to travel to Australia in the second half of 2021 (8% being the corresponding figure for New Zealand). While this is far behind the UK (49%), Singapore (47%) and Canada (43%), South East Asia agents are nonetheless more optimistic than agents in other regions. This might be explained by speculation that Australia and New Zealand will form ‘travel bubbles’ with countries with low Covid-19 cases – Singapore has already been considered favourably by Australia and could potentially be among the first to form a bubble.

It is likely that geographic proximity, continued concerns around COVID-19 outbreaks and ongoing speculation about travel bubbles are keeping South East Asia agents a bit keener on Australia and New Zealand relative to agents in other regions.

Fig 4.3: Do you expect students to be able to travel to the following destination countries in the second half of 2021? 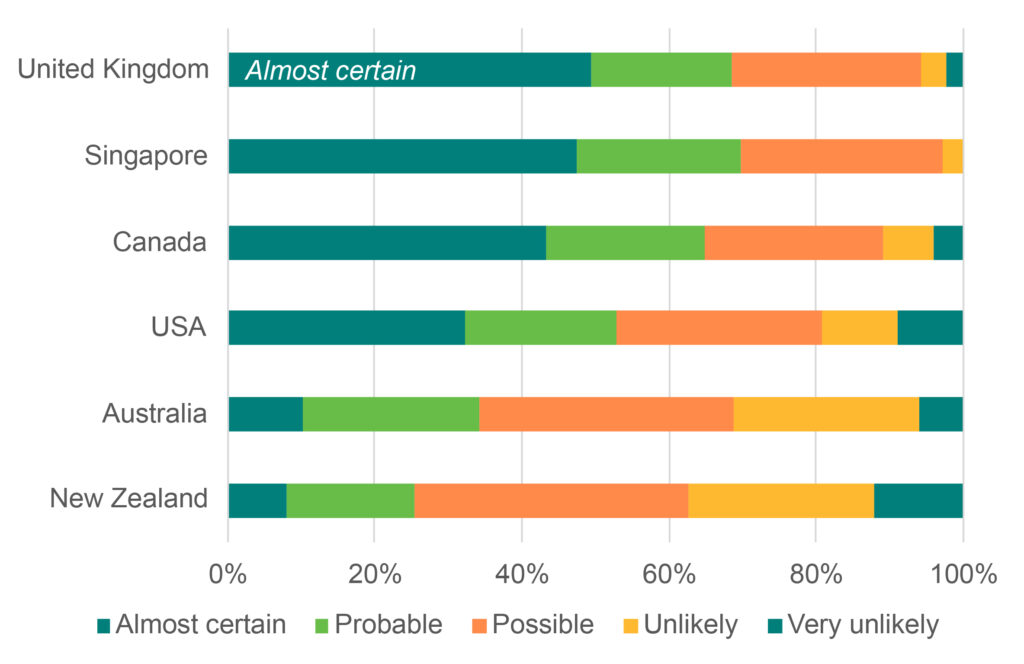 However, these sentiments are not translating into short-term interest. Neither the strong handling of the pandemic, nor the slightly more optimistic prospects for travel, are translating into interest in studying in Australia and New Zealand at this point in time. When asked whether there has been more interest in education destinations in recent months, South East Asia agents report very favourable views towards Canada (74% agree/strongly agree), Singapore (69%) and the UK (67%). Australia and New Zealand by contrast lag behind (at 52% and 35% respectively).

Both Canada and the UK are considered to be open and welcoming to international students and Canada in particular is a winner because it is also perceived as safe and stable.  Compared to other regions, openness is less of an issue for agents in South East Asia. This could be because there is a more cautious approach to travel in the current pandemic, and also because of the opportunities to study with significant UK and Australian brands locally at branch campuses throughout the region, for example in Singapore which is in itself a growing study destination.

Fig4.4: “Over the past two months, there has been more interest in this country as an education destination compared to other countries.” 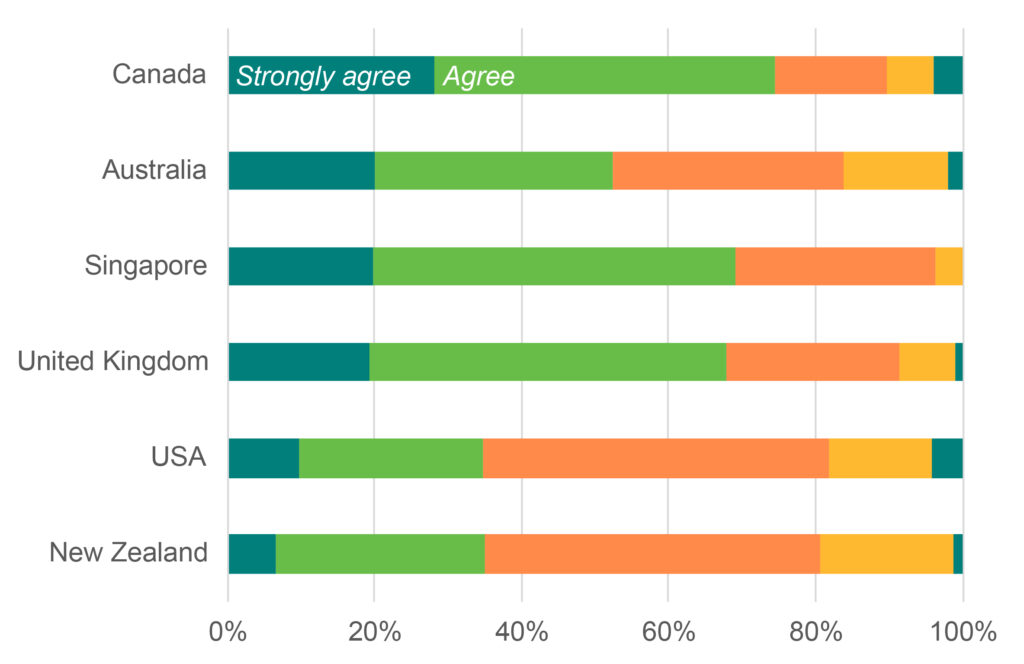