After the pandemic, the war weighs on the minds of students and parents

Two-thirds of the world’s population has received at least one dose of a COVID-19 vaccine. For international students and their families, COVID-19 has become less and less of a concern. The last Navitas Agent Perception Survey from October 2021 showed that COVID-19 barely registered as a top five issue in terms of students’ choice of study destination across the globe. In the most recent survey from May 2022, the concerns about COVID-19 have continued to fade.

In the May 2022 survey, we turned a spotlight on the war in the Ukraine and sought to understand how students and their families might be reacting to these developments. Specifically, we asked agents how concerned their clients are about the war in Ukraine when they are making decisions about studying overseas.

Across the globe approximately 24% of agents suggested that the war in Ukraine is cause for grave concerns amongst students and parents. Respondents from Central Asia understandably showed a much higher degree of concern than other regions, with almost 70% of agents saying they agree/strongly agree that, “The war in Ukraine is a concern for my clients when they are making decisions about studying overseas”. The high level of concern in Central Asia makes a lot of sense given their close geographic proximity, and the historical flow of students across borders within that part of the world.

The war looms large in the minds of many. Across the rest of the world, between 20% and 40% of respondents suggest that the war is an issue of concern. The levels of concern are lowest in North Asia and South Asia.

Figure 1: Level of agreement with the statement, “The war in Ukraine is a concern for my clients when they are making decisions about studying overseas”. 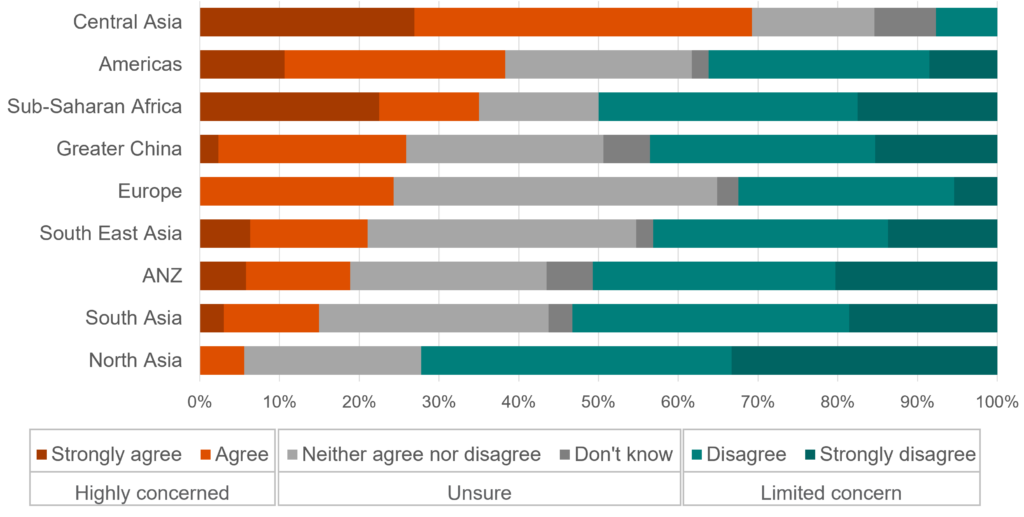 The war may make destinations in Europe less appealing, while heightening concerns regarding the cost and timing of study

These concerns translate into different actions or responses. Where there is a high degree of concern, the most common response may be a preference for destinations outside of Europe (58%), followed by increased cost sensitivity (40%), or the postponement of study plans (38%). That being said, amongst those that have a high degree of concern, almost a quarter (23%) indicated that there would be no subsequent impact on study plans.

“The war in Ukraine continues to highlight the importance of safety and inclusive and welcoming communities to nurture student’s talents and learning aspirations away from the threat of conflict. We have seen an increase in interest from students across Central Asia to destinations such as the UK, Canada, then more recently the UAE and Australia. This is a trend we anticipate will continue as parents and students continue to invest with greater confidence in study abroad options as a means to enhance futures through learning.” – Omid Honari, Regional Sales Director, EMEAA.

Figure 2: Impact of the war in Ukraine on student decision-making among students/parents who are highly concerned 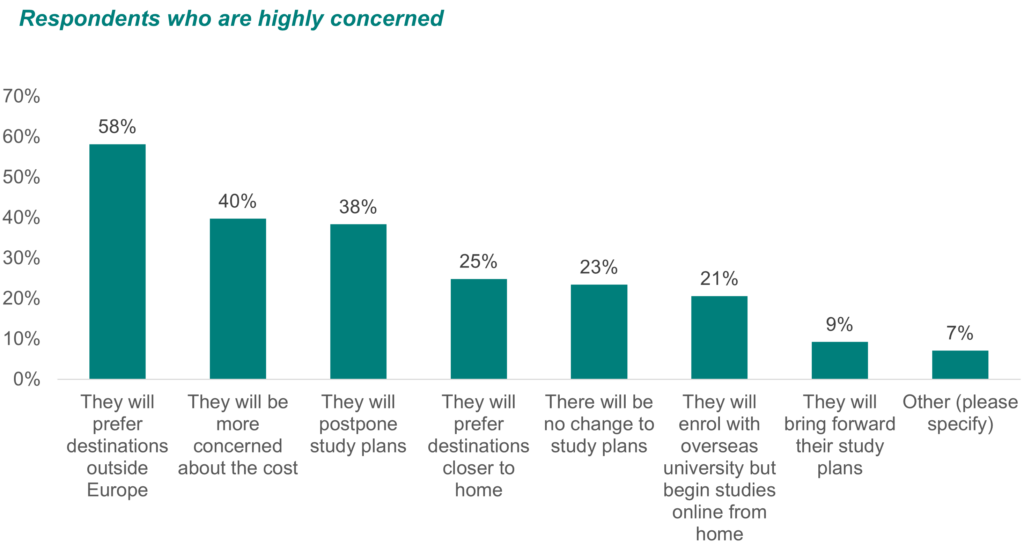 Of the 46% of agents who believe their clients have limited or no concerns about the war’s impact on their plans to study abroad, half expect that there will be no subsequent impact on their client’s study plans. It is worth recognising that a further 30% of agents are unsure about the level of concern arising from the war. The passage of time, the trajectory of the conflict, and the knock-on effects of the war will ultimately determine whether the levels of concern continue to rise or begin to dissipate.

The war in Ukraine is a significant world event with disastrous implications for many. While the war continues, international students and their parents from all over the world have taken notice. Europe as a destination may see lower levels of interest and concerns about the cost and timing of study plans may arise. But as with the pandemic, the vast majority of international students will be resilient and undeterred.

It would be untrue to say that international students and their families are unaffected by the war in Ukraine, but it does seem clear that the conflict is currently unlikely to directly result in a significant reduction in demand for international education. It will be interesting to see whether the appeal of destinations outside Europe indicated in this agent research plays out in applications and enrolments over the following months. Ultimately, it may be the impact of associated economic factors, such as increased inflation and cost of living pressures, that really tests the resilience of international students everywhere.