The post-pandemic recovery for international education commenced for the Northern Hemisphere in 2021. In 2022, Australia and New Zealand are joining the recovery in a significant way as borders reopen and high rates of vaccination render COVID-19 travel restrictions a thing of the past. As of July 2022, travellers to Australia no longer need to declare their vaccination status.

Experience shows however that large volumes in cross-border student flows almost inevitably get constrained by the bottlenecks of visa processing. Immigration departments have an important role to play in ensuring the integrity of such cross-border flows. That critical role in border integrity can however stifle the opportunities for legitimate student travellers. These challenges have been compounded by staffing issues wrought by the pandemic.

“The shortage of skilled, experienced staff in some big markets like India is having and adverse impact on the ability to ramp up visa processing teams which, in many cases, were down-sized during COVID-19. Student travellers are not the only ones being impacted by the congestion we are seeing in the visa sections of a number of destination countries.” – Tony Cullen, EGM Global Engagement.

International education agents play a crucial role in assisting would-be international students in navigating the gauntlet that is their application for a student visa/study permit. The pandemic has made such applications all the more challenging with restricted access to visa offices, changing rules and increased requirements for travel.

In the most recent Navitas Agent Perception survey, over 700 international education agents highlighted significant differences in perceptions of how well the major destination countries are coping with the high demand for student visas in this recovery phase.

Agents reported notably strong positive views about the UK across a number of indicators. In terms of the ease of the visa application process, 53% of agents gave it the highest rating (Very good), with Australia’s 32% at a distant second. The UK appears to be a league apart from the rest on this measure. 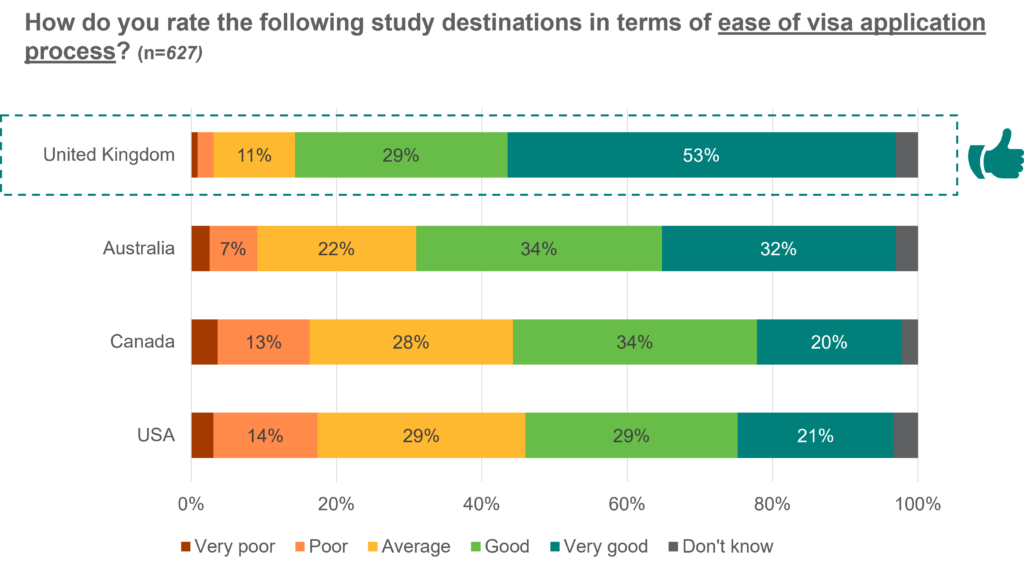 Perceptions around visa acceptance rates for each destination unsurprisingly correlate to the reality experienced by agents on the ground, particularly those where students are considered to be at a high risk of breaching visa conditions. For example, agents from South Asia and  Sub-Saharan Africa express stronger negative sentiment than other regions, specifically for Canada and the US. This poses a particular challenge for institutions looking to diversify the composition of their international student cohort by growing across the African continent.

Destinations should consider that processing time appears to be a more important factor than the cost of the application.

In many cases, the difficulties in the application process and the uncertainty around the likelihood of success is made worse by long wait times. When agents were asked to rate the different destinations in terms of visa processing times, Canada fared the worst with over 30% respondents rating processing times as “poor” or “very poor”. By contrast, ~5% of respondents expressed a negative opinion about the UK visa processing time.

Recent news reports however suggest that UK’s strong performance may have been short-lived. At the time of the survey, the UK was handling visa volumes well, but have since removed priority processing from a number of markets. There also appears to be greater scrutiny of applications, particularly from so-called ‘high-risk’ markets as they see a surge in applications from students out of the sub-continent and Nigeria, in particular.

The cost of a Canadian study permit application (USD 120) is less than a third of the cost in the UK (USD 450) and Australia (USD 450). Unsurprisingly, this is reflected in the latest Agent Perception Survey with Canada having the most positive perceptions (64% Good or Very Good) in relation to the cost of visas. The UK, which leads on most other measures, has the lowest positive scores at 43% Good/Very Good. 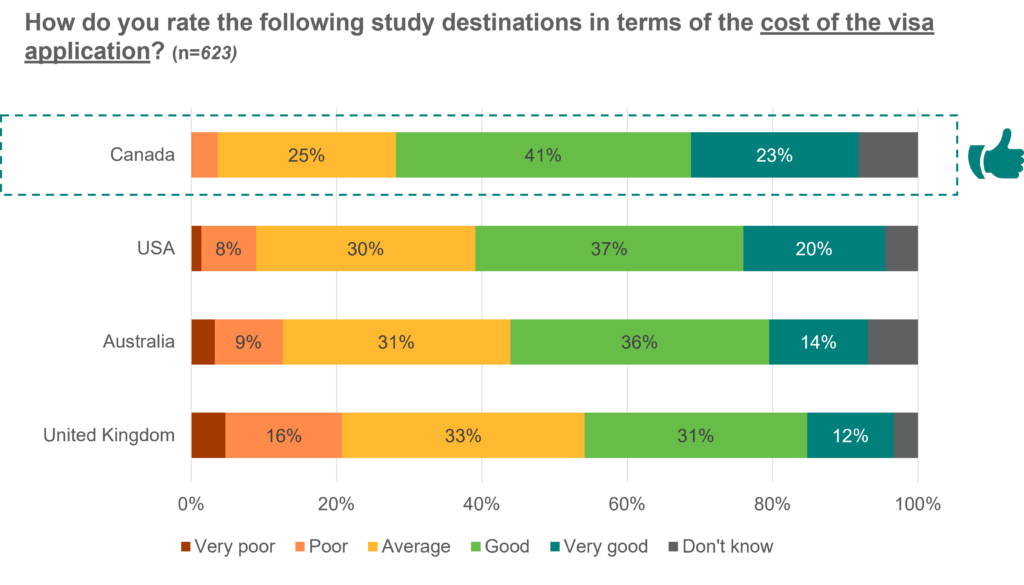 As the following summary table shows, the UK is ranked first on all visa process parameters except cost, where it ranks last. Australia is second on most measures, except the all-important visa processing time.

Canada is in the bottom two for all parameters except cost, where it ranks first. Students and agents may consider the higher costs of visa applications in the UK justified given high levels of satisfaction across other aspects of the process. At the end of the day, the cost of application is only a small fraction of the cost of studying abroad.

In 2021, Canada led the world in visa processing with the introduction of the innovative, student-centric policy of a guaranteed turnaround time; students that applied for a study permit in May were promised a decision on their application by August, thereby giving students clarity for their ability to commence in the fall. In the coming months as international travel resumes, all destination countries will face increased difficulties when it comes to immigration processing, not just for international students but for other categories of applicants alike. Those destinations that can find ways to prioritise student visas at those critical pre-commencement windows will be able to maximise the momentum of the recovery.