The 1980s was a decade of strong economic growth and iconic sporting success for Western Australia. The deregulation of Australia’s financial system, including the floating of the Australian dollar, provided a needed boost to our local export sector, while the successful tapping of remote gas reserves in the north-west was a game changer for local households and industry. At the same time, the success of the 1983 challenge and the 1987 Fremantle defence of the America’s Cup provided the opportunity to celebrate and show off our great state to the world.

It was during this decade that Western Australia also led the way in international education. The first to market in many of what are now Australia’s key student source markets, including China, India, Malaysia, Kenya and Zimbabwe, we punched well above our demographic weight in attracting international students and the industry emerged as an important part of our state’s economy.

Yet despite this early success and Australian market’s significant ongoing growth – international education is now the nation’s third-largest export contributing over $28 billion to our economy each year – Western Australia has lost ground over the last 20 years.

Yet, while there are still many challenges, the opportunity remains for us to do more to capture a greater share of this market and make international education a key pillar of our state’s economic recovery.

So what are the challenges we face and how can we improve? 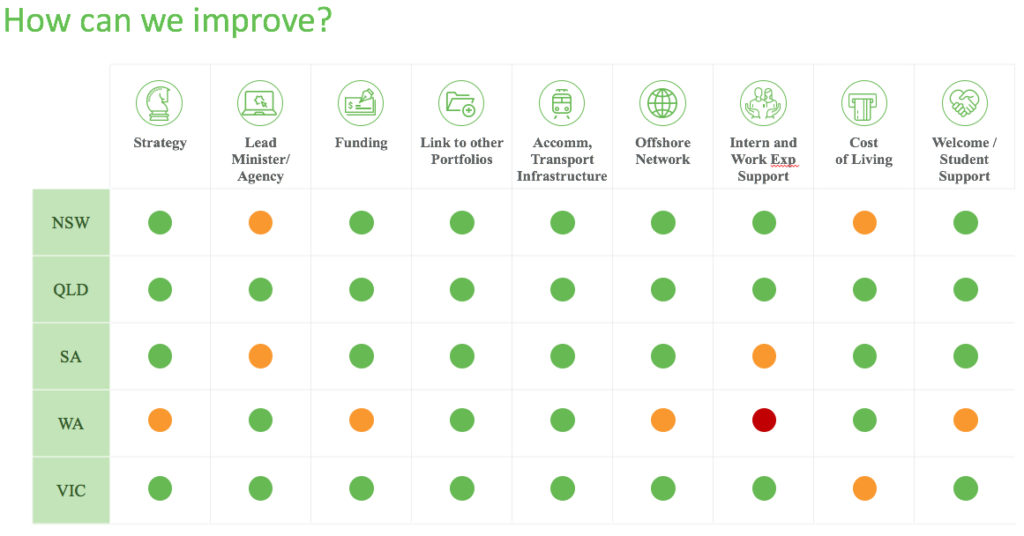 It’s also clear that more must be done to promote Perth as a destination city. The survey showed there was also a general lack of awareness of Perth compared with other Australian capital cities, with 90 per cent of those surveyed knowing little about us.

This aligns with the feedback we receive from student recruitment agents and also reflects the reality that, compared with other major Australian cities like Sydney and Melbourne, we don’t have large populations of migrants from key source markets that provide links with prospective students.

It’s a reality that underlines the importance of creating a clear value proposition and selling points for why international students should come here to study, supported by targeted marketing collateral that promotes our unique advantages to agents, students and their families.

The starting point for all this is an international education strategy that is coordinated and implemented across all key areas of government, including tourism, infrastructure, immigration, foreign affairs, industry and state development. We are still one of the few states without a strategy and, while the McGowan Government has committed to getting this finalised in 2018, we are still playing catch up.

We also need to close the funding gap. Western Australia still lags well behind other states that are investing significant resources to market and promoting their states as a destination of choice for international students. In Queensland, $25.3 million was committed in 2016 for investment over five years to implement its international education strategy, while Victoria has committed $31.9 million over four years and South Australia is investing almost $10 million over four years to continue to grow international student numbers.

The McGowan Government last year committed an additional $2 million dollars over five years to develop and implement our strategy that, combined with existing funding for StudyPerth, brings total funding for international education in Western Australia to just under $2 million each year. It will be difficult to regain lost ground if other states are doing more than we are to promote international education.

On the flipside, it has been positive to see the creation of a Deputy Director General position in the Department of Jobs, Tourism, Science and Innovation to drive our strategy forward, and the recent appointment of Navitas co-founder Rod Jones as Chairman of StudyPerth is also a major boost. Rod is a passionate advocate of our sector who will clearly communicate the benefits of international education for WA businesses and the local community to garner support for the major initiatives.

We look forward to working with all stakeholders to make this a reality.

Note: The following article was based on excerpts from a speech given by Tracey Horton at this year’s Economic and Political Overview (EPO) in Perth presented by CEDA (Committee for Economic Development of Australia).

Professor Tracey Horton AO was appointed Navitas Director in 2012 and Non-Executive Chairman Navitas in 2016. With an extensive international business and education experience including positions as Winthrop Professor and Dean at the University of Western Australia's Business School, Tracey has held executive and senior management roles in North America with Bain & Company and across Australia with Poynton and Partners and the Reserve Bank of Australia. Tracey’s significant governance experience includes past directorships with Skilled Group and Automotive Holdings Group. She is a Commissioner for Tourism Western Australia, Chairman of Presbyterian Ladies College and Past President of the Chamber of Commerce and Industry (WA). Added to these list of memberships she also serves as a member of the Australian Takeovers Panel, the national board of the Australian Institute of Company Directors and the Bain & Company Advisory Board. In 2017, Ms Horton was made an Officer of the Order of Australia for distinguished service to business and business education through a range of leadership and academic roles, and to the arts in Western Australia.