Education is not often considered an export in the U.S. A public good, yes. A public service, yes. But, when it comes to the education of international students, education is also an export. Why? Because quality education is a multiplier, the effect of which is both educated, empowered students as well as the change those students activate in the world around them.

Students educated here in the U.S. will return to their home countries, bringing with them the knowledge and experience gained here to pass on to the people in their community. It’s this potential impact of education – on economies, policies, human welfare and diplomatic and trade relations – that transforms the education of international students from a public good to a valuable export that can drive jobs and economic growth in the U.S. as well as abroad.

It’s easy—and it would be a mistake—to think about this loss only in terms of economic impact. In 2015-16, international students added nearly $36 billion to the U.S. economy. That’s an average of over $34,000 per student. But international students contribute much more than the tuition dollars they bring to our colleges and universities. The slowing growth rate coupled with concerns about immigration policies under a new administration means we are at risk of losing the intellectual and political benefits derived from education as an export. The U.S. has long been the No. 1 destination for international students seeking a western education—these factors could put that at risk. 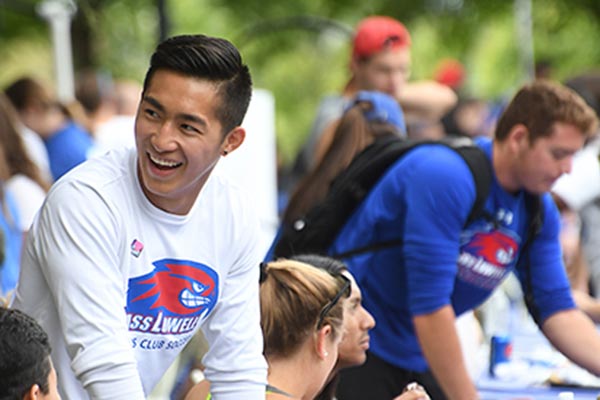 International students come to the U.S. from all over the world seeking education and career training not available in their home countries. Most return to those countries after graduation to pursue a career in their field of study, which is when the true power of a high-quality education is realized. These are students like Patricia Luki, an Indonesian student at the University of Massachusetts Lowell, and Nneoma Ugwu, a Nigerian undergraduate at the University of Massachusetts Dartmouth. Patricia is currently completing her Masters of Science in Autism Studies, hoping to return home to help create research-based practices to support people living with developmental disabilities. Nneoma also plans to return home, using her degree in civil engineering to work in the ministry of transportation or construction. Both women aspire to make changes in their respective countries, Patricia through better care for children and adults with disabilities and Nneoma by holding a political position that will enable her to implement the important concepts she learned in her studies to effect positive change.

This global impact is a significant benefit, but students like Patricia and Nneoma also bring value to their U.S. classrooms. Students today must be prepared to communicate, collaborate, and compete in a world that’s becoming smaller and more diverse. Yet the 2016 Open Doors data shows that only one in 10 U.S. undergraduate students studies abroad, meaning the majority of American students have limited exposure to opportunities to build their language skills and expand their global perspectives in another country. A growing and diverse international student population on U.S. campuses enriches the learning experience for all students, and American business and industry ultimately benefit from globally aware graduates.

While international student enrollments in the U.S. have grown steadily over the last decade, the U.S. could be doing much more to compete in an increasingly crowded and complex market with a focus on strategically growing our global presence. By communicating clearly that international students are welcome on U.S. campuses and embracing forward-looking policies, the U.S. can maintain its leadership status in global higher education over the long-term.

By following the lead of other countries, like Canada’s policy changes that anticipate doubling the international student population by 2022, the U.S. can encourage international student enrollment with similar results. This approach in the U.S. could add $72 billion annually to the economy within the next decade. For perspective, pharmaceuticals account for $47.3 billion of U.S. exports currently.

While some may fear that opening up our borders to students seeking an education will result in students overstaying their visas, the available data show that fewer than 1 percent of foreign visitors overstayed their visa last year. And yes, it is true there are 85,000 available H-1B visas each year and in 2015 there were 233,000 applications, but this includes both students looking to study in the U.S. and others seeking to come here.

In my experience, the vast majority of international students are similar to Patricia and Nneoma and hope to return to their country of origin to make a difference in their own communities, taking with them the high-quality education they earned here in the U.S. These students become leaders in both business and government, de facto ambassadors for the U.S. encouraging future trade and relationships and creating networks across borders that improve international understanding and strengthen the national security of the U.S.

If we were to truly expand higher education opportunities for international students by increasing the total number of enrollments – not just the percentage of total international enrollments – we would not only be adding money to the economy, but also creating more high-paying jobs for U.S. citizens at colleges and universities.

To preserve the benefits education as an export has afforded us, the U.S. must reverse the current trend of a diminishing share of international students seeking an education here. Finding strategic and creative ways to encourage students like Patricia and Nneoma in an increasingly insular political environment will be challenging. But the export of education through international students is a proven way to solidify the U.S.’s status as a global leader and strengthen American industry and the U.S. economy, as well as those of other countries in the world.

About The Author Gretchen Bataille