South Asian agents are swinging towards the UK

South Asia is responding strongly to the opportunity to study face-to-face in the UK – the swing towards the UK is strongly tied to the sense that it is now much more open and welcoming than it once was.

The long-awaited re-introduction of post-study work rights in the UK led to a strong increase in interest in studying in the UK in the period immediately prior to COVID-19. While the pandemic has led to a dramatic slow-down in global student mobility, the UK has been able to maintain at least some momentum.

Almost every single South Asian agent that responded to the latest Navitas survey (September 2020) agree/strongly agreed that there has been more interest in the UK as a study destination in the recent months. Agents are also reporting strong interest in Canada and Australia as destinations, albeit to a lesser degree. This result is consistent with trends in key datasets from the Home Office which showed a very strong increase in interest from India in the UK pre-pandemic. The fact that the South Asian market has responded most strongly to the re-introduction of post-study work rights is consistent with the fact that short and long-term migration are a key motivator for many international students from the region.

Figure 1: “Over the past two months, there has been more interest in this country as an education destination compared to other countries.” (Respondents in South Asia) 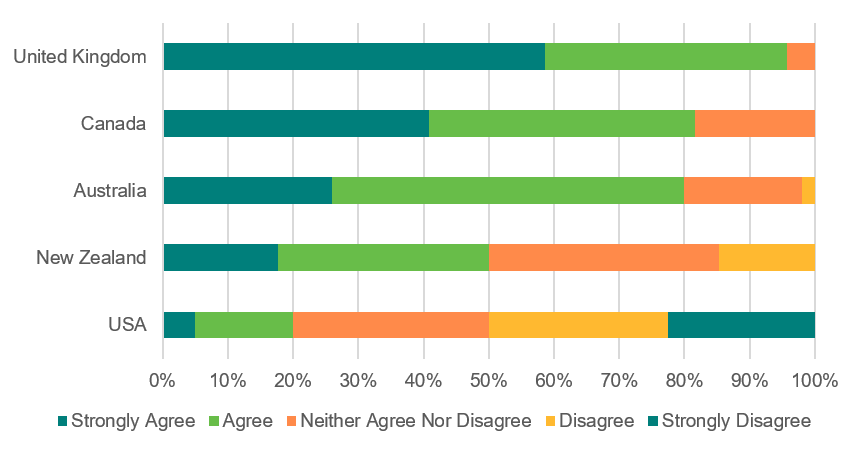 In the eyes of agents in South Asia, the UK government has climbed back from its early mishandling of COVID-19, with over 90% agreeing/strongly agreeing that the more recent handling of the coronavirus has made it a more attractive study destination (noting that this survey was administered before the more recent outbreaks and lockdown).

Agents have comparable views on the handling of the pandemic by the governments of Australia, New Zealand and Canada, and unsurprisingly, the performance of the USA is seen in a very negative light.

Simon Jacobs, Navitas Regional Sales Director for South Asia, highlights the fact that UK government policies towards foreign travellers has been comparatively open and consistent throughout 2020. Even if the internal handling of the pandemic in the UK has been widely criticised, it is much harder to find fault with its external management of travellers and borders.

Figure 2: “Over the past two months, the way this country’s government has handled coronavirus has made it a more attractive study destination.” (Respondents in South Asia) 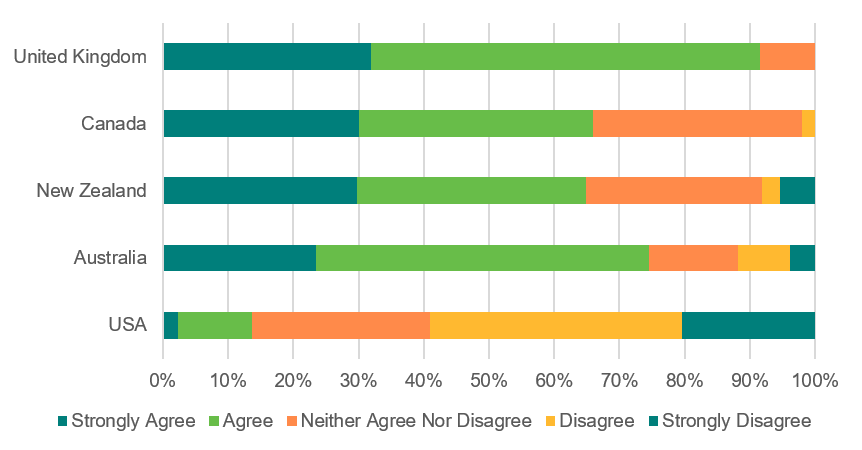 The UK, Canada, New Zealand, and to a lesser extent Australia, all appear relatively ‘safe and stable’ in the eyes of agents in South Asia. This is unsurprising when the far higher case load and less sophisticated health systems in places like India is taken into account. Even after its second wave, the UK’s case count would appear relatively moderate compared to how the pandemic is playing out in major cities in South Asia, and the NHS would certainly be seen to provide a higher standard of care.

There are however, big differences when it comes to perceptions of which destinations are ‘open and welcoming’. Once again, the UK enjoys nearly universal approval with 93% agreeing/strongly agreeing that its reputation as open and welcoming has improved of late. In contrast, New Zealand is seen less positively with only 46% agreeing/strongly agreeing that it has become more open and welcoming in recent months. Canada and Australia sit somewhere in between at 62% and 63% respectively – well ahead of Canada, but well behind the UK.

According to Simon Jacobs, there are three key factors that are influencing the choice of destinations in this region; borders, visas and flights. The UK has certainly been able to deliver on all three, with borders remaining open throughout 2020, with Confirmations of Acceptance for Studies (CASs) visas flowing, and with air travel having restarted in earnest in July. To some extent, the perception of the UK’s openness is also influenced by how closed Canada and Australia appear (the survey was in the field prior to Canada’s October announcement that it would be reopening to international students).

Figure 3:  Proportion that agree/strongly agree that the reputation of a country as ‘safe and stable’ and ‘open and welcoming’ has improved in the last two months (Respondents in South Asia) 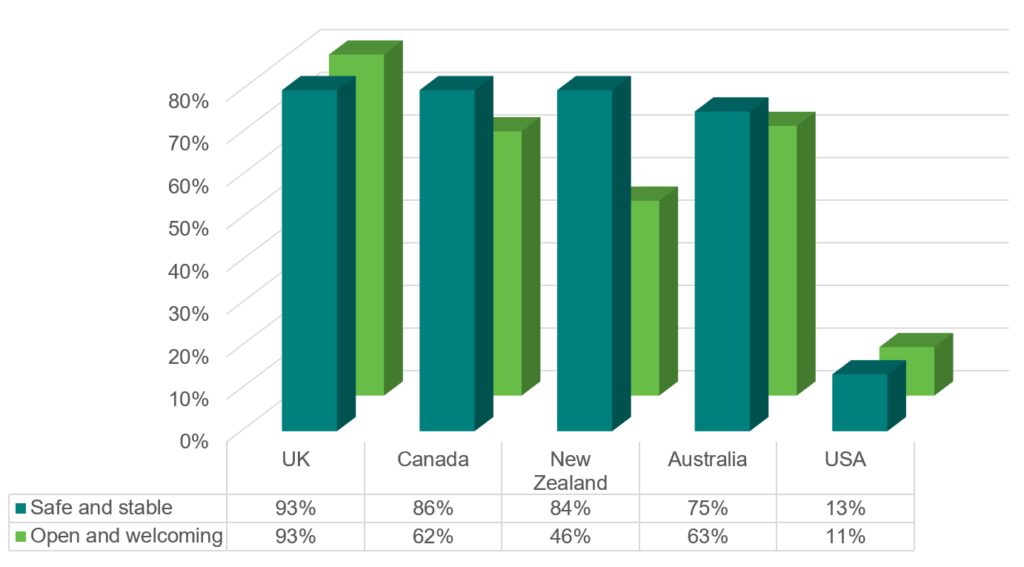 Agents’ views on which countries are open and welcoming are tightly coupled to which countries they think students will be able to travel to next year. More than 3 in 5 agents report that it is ‘almost certain’ that students will be able to travel to the UK in the first half of 2021, but fewer than 2 in 5 agents would say this is the case for Canada, Australia and New Zealand. Given the UK’s strength in maintaining open borders, visa processing and flight availability as discussed above, it is conspicuous that the level of confidence in being able to travel to the UK is not closer to 100%. It could be that agents do not take for granted that the UK’s borders will remain open indefinitely.

Figure 4: Do you expect students to be able to travel to the following destination countries in the first half of 2021? (Respondents in South Asia) 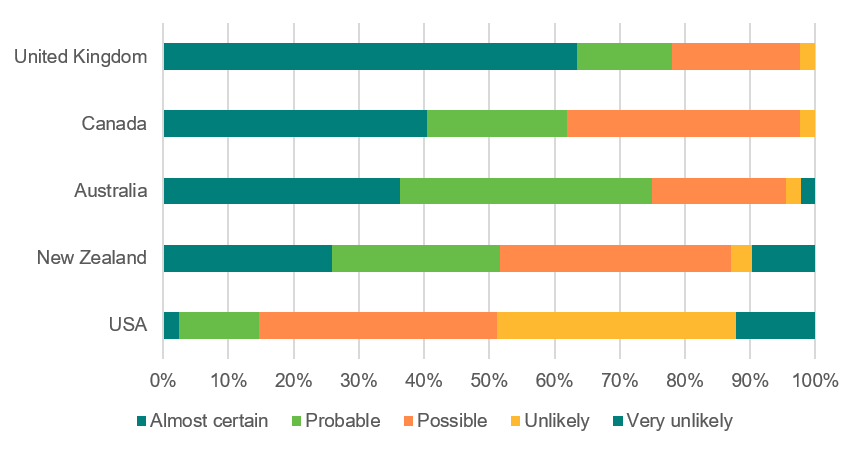 Compared to China and South East Asia, agents in South Asia are much more optimistic for a strong rebound in 2021. Agents in South Asia are anticipating growth of around 4% in the first-half of 2021 and 25% in the second-half of 2021 compared to the corresponding period pre-COVID. If these predictions do eventuate, the UK appears to be exceedingly well-positioned to be the beneficiary of this growth in 2021.

One key risk for institutions in the UK, is the extent to which visa refusals from South Asia might start to rise, having a more pronounced impact on institution compliance requirements. In the short term, this is likely to be especially challenging in light of smaller numbers of students from China and South East Asia that might have previously offset some of the higher visa refusal rates from South Asia.

You may also be interested in agent perceptions from Greater China and South East Asia.