South Asia’s current bias towards Canada and the UK is unequivocal, with the USA preparing for a comeback in the region in 2022

For both countries, an overwhelming 92% of agents agree or strongly agree that there has been more interest in recent months. While agents from other countries view Canada and the United Kingdom positively, agents in South Asia are the most positive, approaching near unanimous support.

In contrast, Australia and New Zealand are viewed very negatively with only 40% and 22% of agents respectively seeing increased interest of late. Perceptions of these countries are likely weighed down by the view that there is a negligible chance of travel to either Australia or New Zealand in the second half of 2021. Because Indian students are often motivated by the migration pathway that education provides, there is a reluctance to begin studies online when there is no date in sight for student entry into Australia.

“Indian student motivation to study abroad (for all destinations) isn’t only the degree itself, but it’s often also the post-study work or migration options that come after and the ability to work while studying.”
Simon Jacobs, Regional Sales Director, South Asia

Fig 3.1: “Over the past two months, there has been more interest in this country as an education destination compared to other countries.” 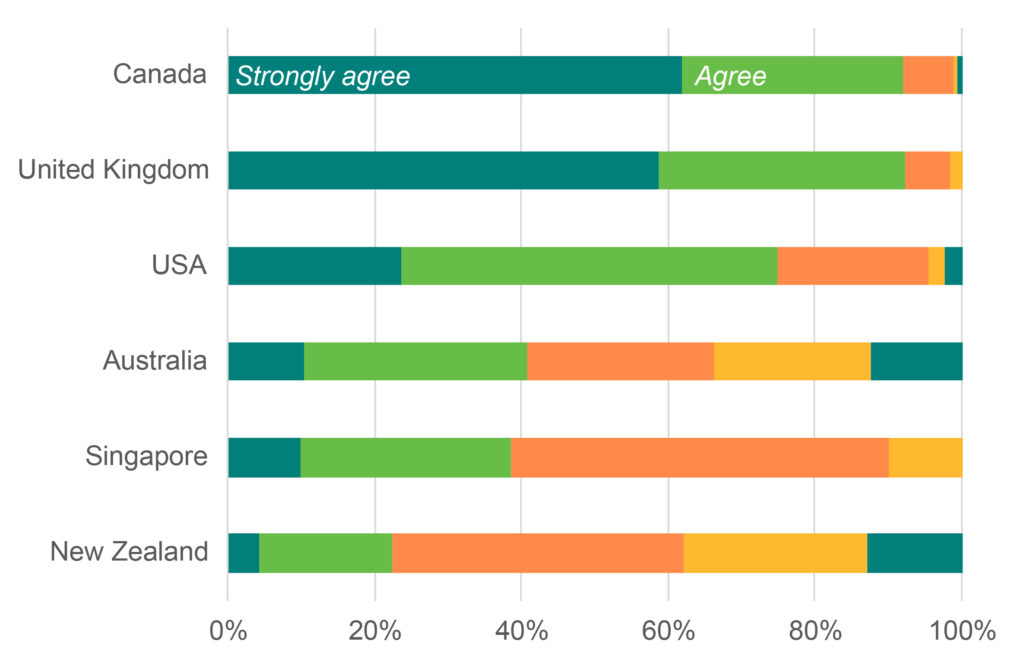 On the other hand, South Asian agents are most optimistic about the reopening of the United States (35% almost certain). This translates into a strong response to the question on whether there has been more interest (75% agree/strongly agree). This reflects anecdotal evidence from recruitment teams in South Asia that the change in administration and the impressive vaccination roll-out in the US have created a good impression among Indian students and their families. In line with the rapid resurgence of the United States being observed more generally, this uniquely positive view of the United States in South Asia provides a clear indication that at least part of that resurgence is going to be driven by students from this region.

Fig 3.2: Do you expect students to be able to travel to the following destination countries in the second half of 2021? 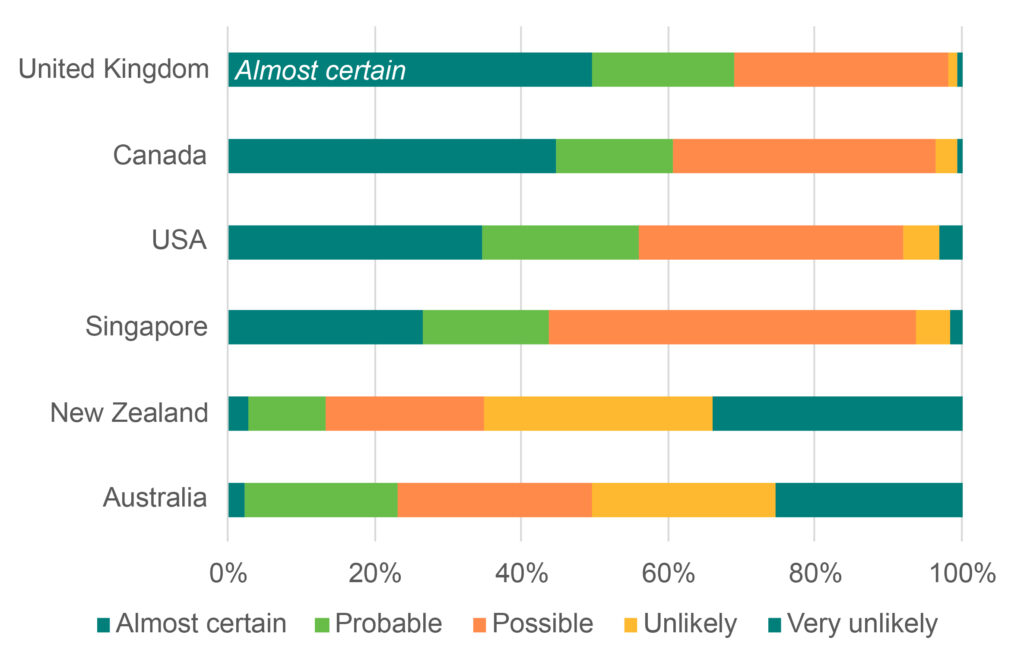 Immediately prior to the second wave of COVID-19, agents in South Asia remained bullish about growth over the next couple of years

Consistent with previous research, the latest Navitas agent survey shows that agents from South Asia are anticipating strong growth in the next 12-24 months. The first half of 2021 is anticipated to be on par with pre-pandemic levels, followed by steady growth of 20%, 30% and 40% in the subsequent 6 month periods that follow. Given the strong predisposition towards Canada and the UK, it seemed likely that they would be the likely beneficiaries in 2021, with the USA then also enjoying the benefits of the strong rebound in 2022.

Our March research shows that students from South Asia looking to study in the United Kingdom and Canada are poised to rebound in large numbers this year. The data suggests that only the emergence of a significant obstacle could dampen their enthusiasm.

Unfortunately the devastating second wave of COVID-19 across the South Asia region since our research was conducted, may now be that obstacle. 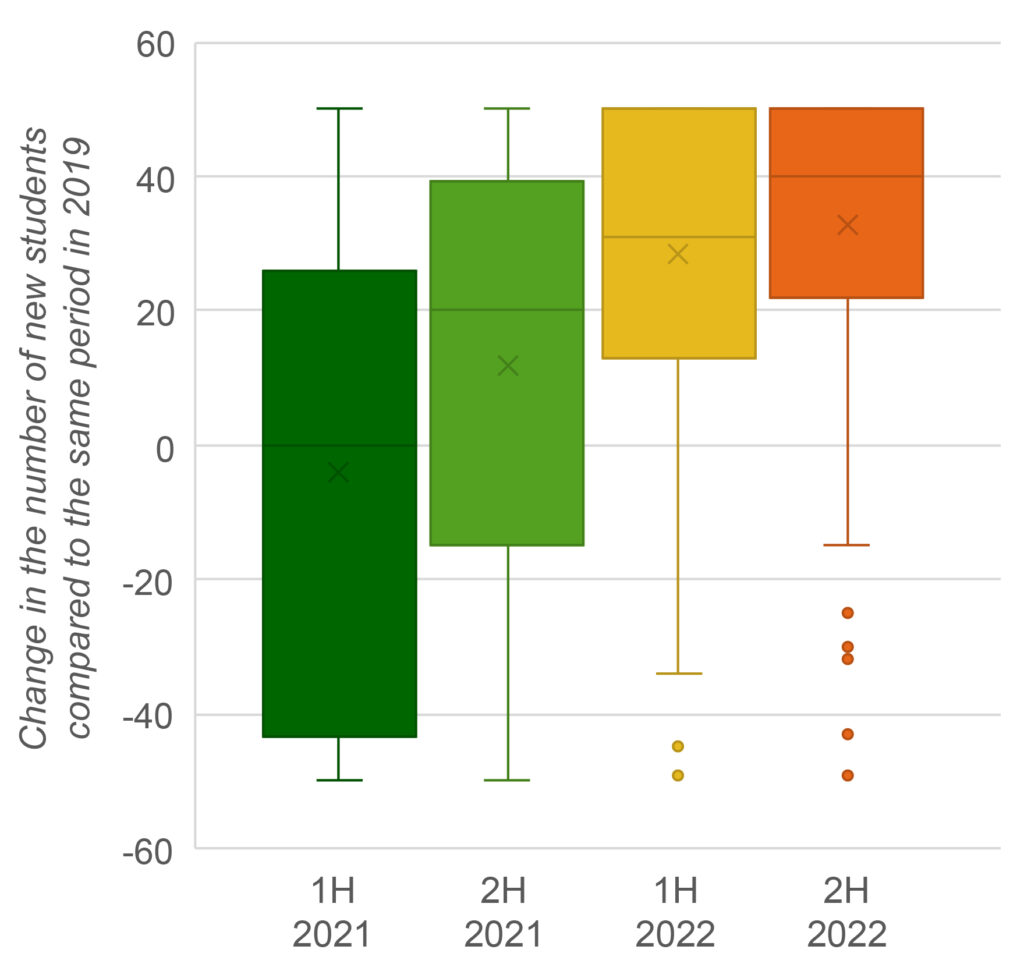 “The Covid situation across South Asia is obviously constantly evolving so it’s difficult to forecast exactly what will happen. However, when you combine delays in exam results, visa turnaround times and lack of IELTS spaces to the grim situation on the ground, and the financial pressures that come with it, we need to reassess our hopes for a strong recovery in this region.”
Simon Jacobs, Regional Sales Director, South Asia

Since this research was conducted a second wave of COVID-19 has ravaged India, with devastating loss of life and far reaching consequences for communities, governments and economies. We are yet to see what impact it will have on the willingness or ability of students to travel overseas for education, but we have already seen countries restrict entry to travellers from India. The United Kingdom, which our research shows was poised to benefit most from a rebound in students from South Asia, has put India, Pakistan and Bangladesh on its ‘red list’ meaning that travellers from there need to quarantine in a hotel at their own expense (approximately AUD3500).

If that requirement alone is not a deterrent, there are other barriers that may limit student mobility from the region – widespread lockdowns mean that agents are less accessible and applying for overseas study will become harder, IELTS centres are closed and embassies are also beginning to close again. It is no wonder that bottlenecks are already emerging.

The sheer enormity of the pandemic crisis in recent weeks is likely to have undercut our latest survey results. However, we know from experience that turnarounds can be fast and furious, and, if the UK downgrades South Asia to its amber list by July, the Autumn intake may still be viable for Indian students.

In contrast to other countries, COVID-19 case numbers still matter