Our latest round of Agent Perception Research captured the views of more than 1000 agents in 77 countries and reveals contrasting attitudes and priorities for agents in different regions around the world.  In particular, the survey reveals that agents in South Asia (comprising India, Pakistan, Sri Lanka, Bangladesh, Nepal and Bhutan for the purpose of this survey) are more concerned with the potential for students to stay and work in the study destination after their studies than they are about factors associated with Covid-19.  In fact, 84% of agents in this region chose ‘access to post-study work rights’ as an important factor while less than a quarter chose ‘Covid-19 impact’ and even less chose ‘vaccination roll-out’.

‘Cost of study’ continues to be an important factor for this region, with more than three quarters (76%) of agents considering it an important factor in the decision-making process. These findings align with our long-standing understanding of the market and other surveys and research that emphasises the importance of affordability in the sub-continent. 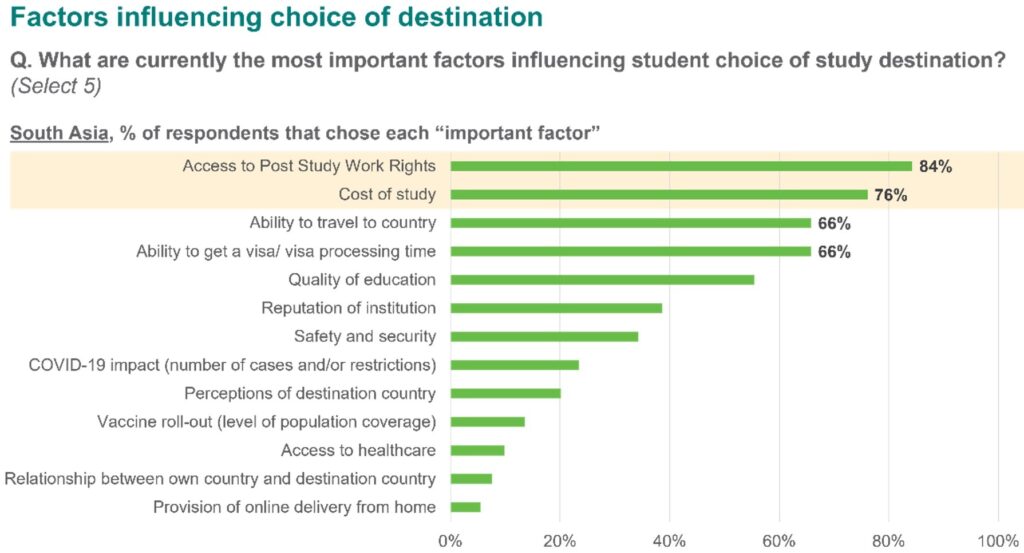 In the latest round of research, 74% of agents from South Asia consider Canada to be ‘very attractive, which is significantly higher than perceptions of other established destinations which were rated ‘very attractive’ by between 51% (USA) and 57% (UK) of South Asian agents surveyed.

“Canada’s appeal as a study destination for South Asian students is of such strength that it’s been able to withstand major obstacles such as Covid and bounce back with a vengeance. One of the main reasons for its attraction is the post-study work and long-term migration options that it offers to students, which, as we know, is one of the major driving factors for this market.”
Simon Jacobs, Regional Sales Director, South Asia (Navitas)

Amongst the smaller destinations, South Asian agents are more positive about Germany and New Zealand. Notably, there appears to be some negative sentiment about Singapore amongst agents from South Asia; with ~20% agents calling Singapore “Unattractive” or “very unattractive”.

“There’s no doubt that Singapore has appeal of its own, be it cost or quality of education. However, its limited options for students aiming for their university studies to lead to permanent migration opportunities means that there’s only one winner when it comes up against Canada.”
Simon Jacobs, Regional Sales Director, South Asia (Navitas)

In contrast to other markets, agents in South Asia are more positive about Australia as a study destination with 52%considering it to be ‘very attractive’, which is not too different from the USA (51%) and the United Kingdom (57%).  This supports anecdotal evidence from our teams on the ground in South Asia who report increasing inquiries and interest in Australia since the government announced the reopening of international borders. However, as Simon Jacobs, Regional Director for South Asia says, competition with other destinations is fierce.

‘Agents are seeing the positive signs coming from Australia but are still seeking clarity on varying requirements for each State. We will see some return of students to Australia in early 2022 but it’s more likely that recovery will happen from this region later in the year. In the meantime, many agents have pivoted to serve the UK which is seen as more accessible and appealing.’