In the latest Navitas agent survey the UK maintains a strong position amongst all anglophone destinations for international students.

Against the odds, the UK was the surprise strongest performer in 2020. Despite its early mishandling of the pandemic, (1) positive policies, (2) a shifting student focus from health and safety to openness and accessibility, and (3) a degree of good timing and good fortune allowed the UK to capitalise on its pre-pandemic momentum. It closed out the year with new student visas granted down just 18% for the 2020 calendar year (Home Office data).

The most dramatic improvement over the last three surveys has been the agents’ rating of the UK government’s handling of the pandemic. The UK’s rating rose from 30% in May 2020, to almost 60% in September 2020, to 60% in March 2021. As Figure 2.1 shows, this is a remarkable achievement given agents’ views on most other destinations have moderated as the months have worn on.

Figure 2.1: Over the past two months, the way this country’s government has handled coronavirus has made it a more attractive study destination – change over time 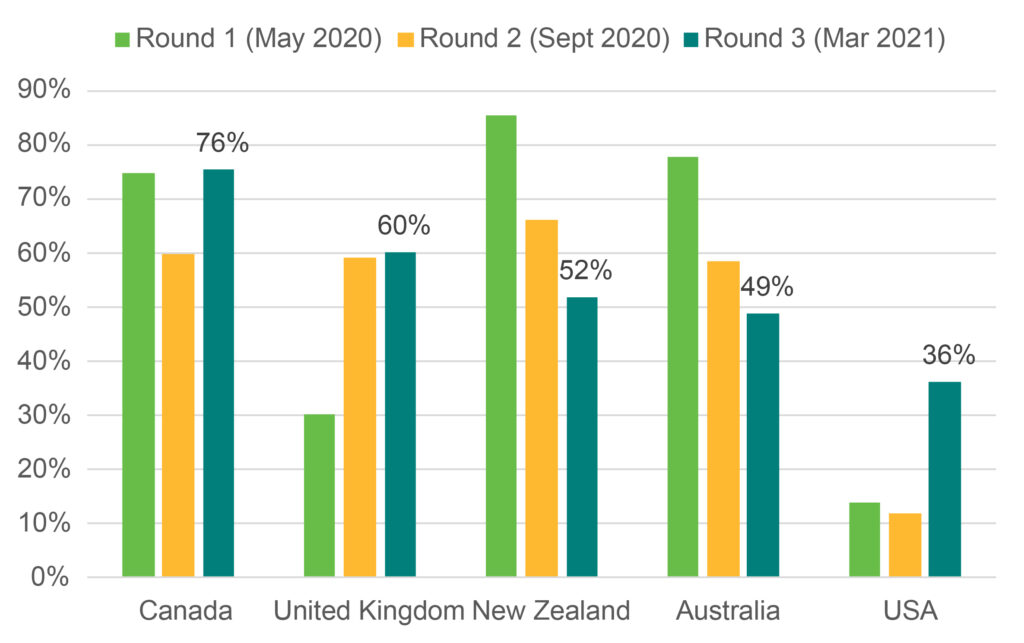 Navitas has been tracking agent sentiments on the twin dimensions of ‘safe and stable’ and ‘open and welcoming’ since the start of the pandemic.

In the September 2020 agent survey, the UK was notable for being the destination with the reputation for being the most open and welcoming (71% agreement). At 74% agreement in the March 2021 survey, the UK has continued to improve in this regard (improving 3 points), but Canada has now jumped 20 points to edge ahead at 76%.

On the dimension of being ‘safe and stable’, the UK continues to exhibit room for improvement at 58% agreement, lagging some distance behind Canada, New Zealand and Australia (79%, 71%, and 69% agreement respectively). It is somewhat puzzling that the UK government’s swift and effective roll-out of the COVID-19 vaccination programme has not had a more substantial effect. At the time of writing, more than 32 million doses had been delivered, with progress on track to vaccinate all over 18s with the first dose by the end of July. As with Canada, all international students have also been included in the vaccination timetable.

Figure 2.2: Proportion that agree/strongly agree that the reputation of a country as ‘safe and stable’ and ‘open and welcoming’ has improved in the last two months – Change between Sept 2020 and March 2021 (percentage points) 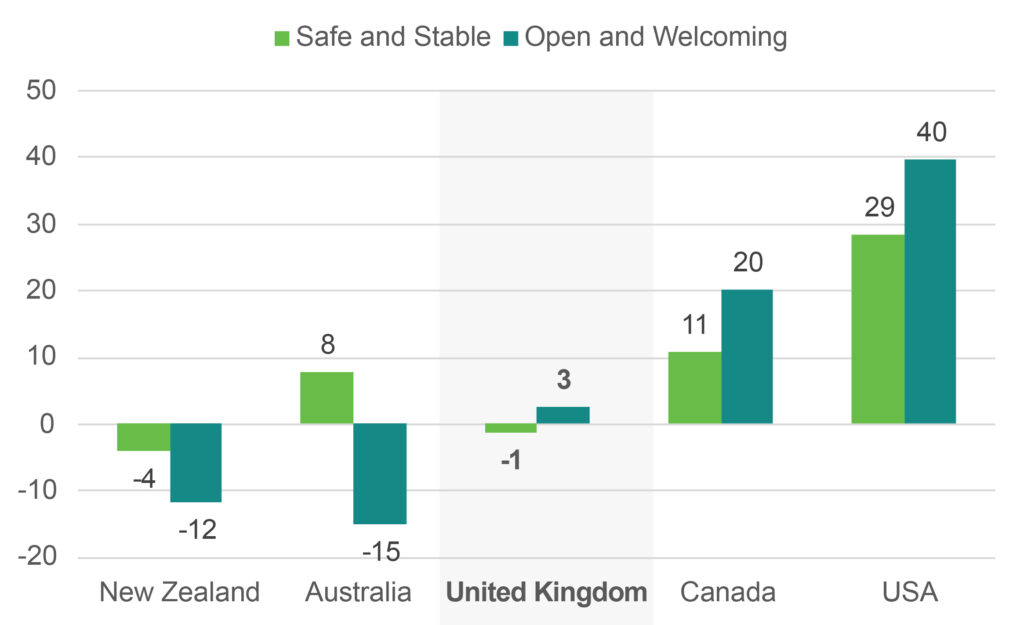 “It’s interesting to see that Canada is now ahead of the UK as being more ‘open & welcoming’ given that the UK government has continued to highlight its commitment to international students through its positive immigration policy. As a sector we are already reaping the benefits of the government’s approach and there is certainly an exciting momentum behind international education in this country, which is starting to play out in applications and enrolments.”
Paul Lovegrove, Chief Executive Officer, University Partnerships Europe &
Chief Operating Officer Navitas Global.

As of March 2021, agents continue to show strong optimism about the ability to travel to the UK in the coming 12 months; 45% per cent were ‘almost certain’ that international students would be able to travel to the UK in the second half of this year, and 64% in the first half of 2022. The fact that the UK leads all other destinations on these measures is a significant advantage given that various other reports are indicating a strong willingness amongst students to switch destinations in order to travel and commence studying face-to-face (QS).

Such switching behaviour is likely to come at the expense of Australia and New Zealand where — at less than 5% almost certain — the prospects for travel in the second half of 2021 are appropriately pessimistic in the eyes of agents.

The commencement of the long-awaited Graduate Route in Summer 2021 will provide a timely reminder of the opportunities afforded to international students to work and live in the UK.

Figure 2.3: Do you expect students to be able to travel to the following destination countries in the second half of 2021/first half of 2022? 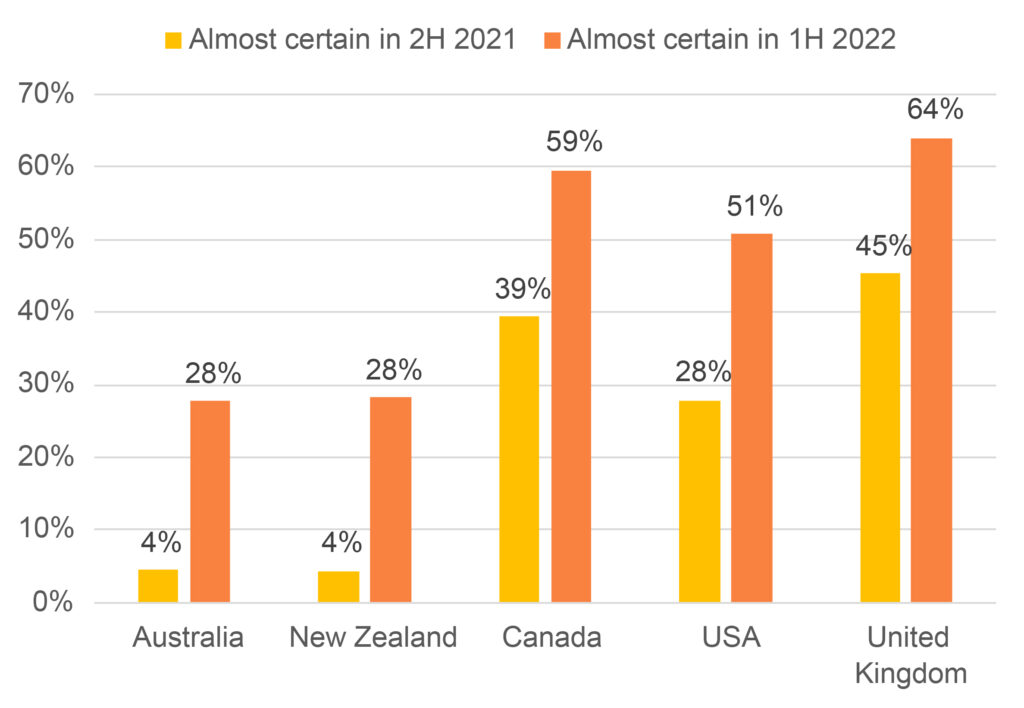 About The Author Paul Lovegrove

Paul joined Navitas in 2015 and has overall responsibility for establishing new partnerships and overseeing all University Partnerships operations in Europe. Paul is responsible for determining the strategic direction of the division, overseeing the quality of delivery and ensuring a focus on efficiency. Paul has a deep and intimate knowledge of international higher education and pathways markets in the United Kingdom gained during his two decades of employment with Study Group in a diverse range of roles. Across his career, Paul worked his way from a teacher to Director of the pathway division, and established trusted and strategic university partnerships with over 18 higher education institutions – 12 of which he personally led the set-up of. Paul holds a LLB from John Moores University, an MBA in General Management from the University of Brighton and a MA, Research from the University of Brighton.