Since the start of the pandemic, Navitas has been capturing the views of education agents around the world. The latest survey of more than 1,000 agents in more than 70 countries reveals that Australia has now lost whatever limited reputational advantages it enjoyed during COVID-19.

In the first round of the Navitas Agent Perception survey in March 2020, agent sentiment about the Australian Government’s handling of the virus was significantly better than all other countries except New Zealand. Almost 80% of agents agreed/strongly agreed that Australia’s handling of the coronavirus had made it a more attractive study destination. Since then there has been a steady decline and 18 months later, only just over 30% of agents agree/strongly agree with that statement.

Only a minority of agents (35%) perceive that Australia has a clear plan for the full recovery of international student arrivals, with Canada, the UK, and the US much further ahead at over 80%. 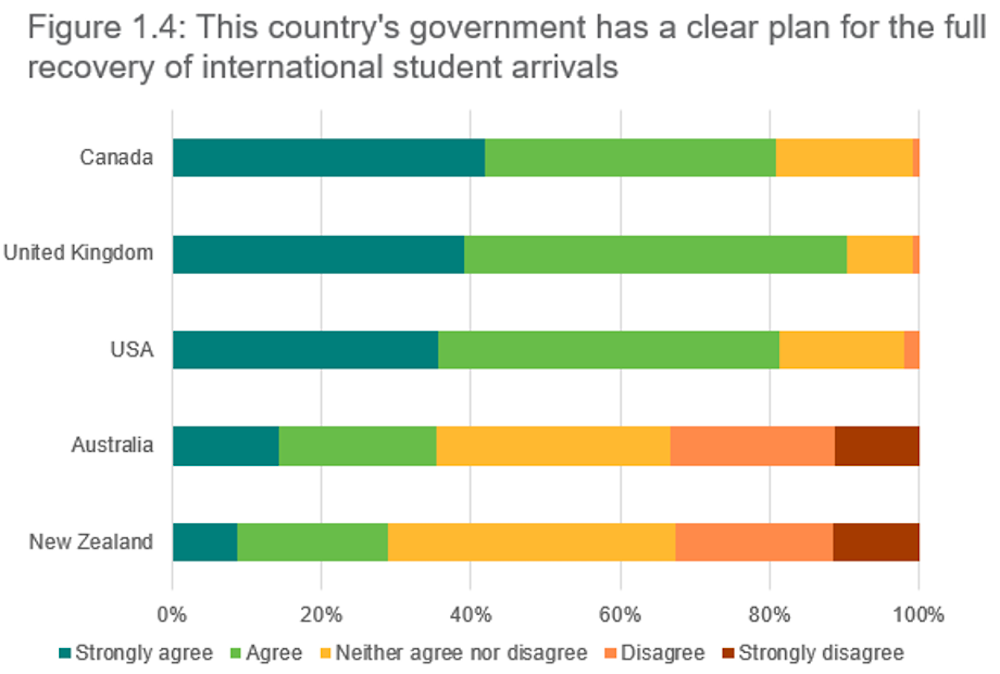 Agent perceptions around a lack of clarity in the Australian government’s plans for student returns is further evidenced in responses related to student ability to travel. For the first half of 2022, only 11% of agents are “almost certain” that students will be able to travel to Australia compare to almost 70% for the United Kingdom. For the second half of 2022, the share of “almost certain” increases to 26%, but the gap vis-à-vis other destinations is still considerable: for US, UK, and Canada, more than 70% of respondents are “almost certain” about the ability for students to travel. 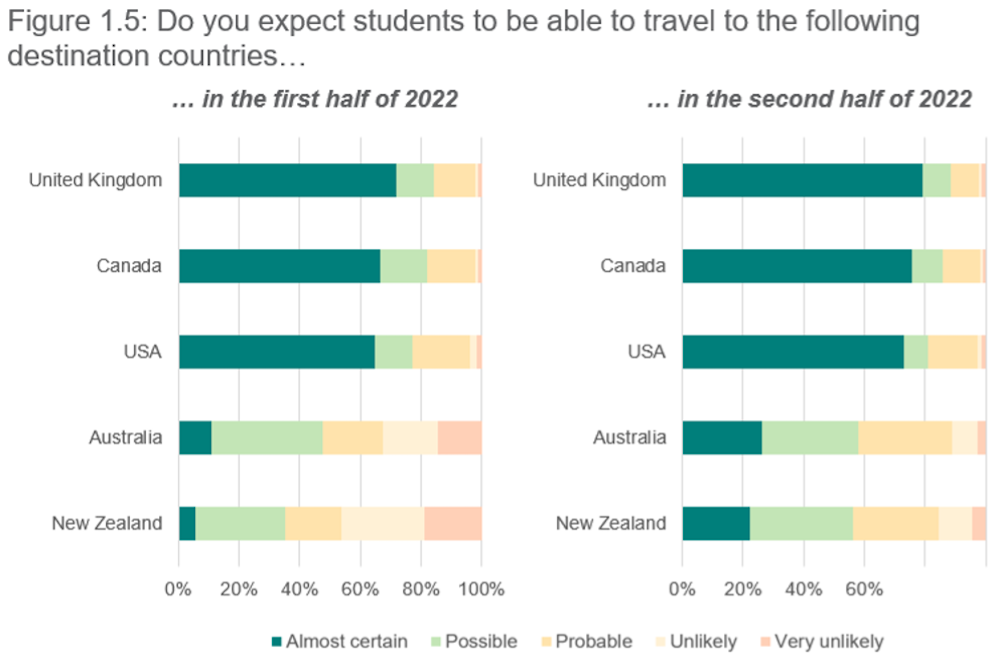 Announcements from various state governments regarding the accelerated re-opening of borders were made after this survey was in the field. In some states at least, the conservative Fortress Australia stance is now giving way to a desire to live life with the virus as the pandemic becomes endemic. This step change, brought about by new political leadership in New South Wales, has been driven by a realisation that the current Covid-19 outbreaks cannot be contained and increasing confidence in the vaccination rollout.

While these positive messages from State governments have been welcomed by agents and brought hope that Australia’s doors are about to open, it is the Australian Government that determines when and how international students might come back into the country and there has been no formal announcement on that to date.

The announcement of plans by New South Wales, Victoria, Queensland and the ACT to begin the process of re-opening borders have not provided the certainty that agents, students and parents crave, but they certainly have sent a signal that Australia is finally turning the corner.

High vaccination rates and shifting political sentiment suggest a dramatic improvement in policy in Australia is possible, but States will follow their own timelines

Despite a slow start to its vaccination program, Australia has now surpassed many countries in terms of its vaccination rate. Shortly after the survey was completed, Australia achieved a key milestone of 70% of the population being fully vaccinated. Australia’s vaccination trajectory has not flattened substantially, with most forecasts showing the next milestone rate of 80% will be achieved well before the end of the year.

There are three things to keep in mind when considering Australia’s reopening roadmap. Firstly, while there has been recent enthusiasm from some states and territories, the Australian Government will ultimately determine  when non-residents (including international students)are able to enter Australia. They will also determine the conditions associated with entry to Australia. Secondly, some states may choose to dictate their own health security measures over and above what the federal government might prescribe. Some jurisdictions will be cautious, but this is not likely for many of Australia’s major destinations – such as NSW, Victoria, South Australia and ACT – who are already ready to welcome international arrivals without any additional requirements. Thirdly, with different reopening milestones and inconsistent vaccination rates across the different jurisdictions, it appears likely that Australia’s reopening will be staged.

The USA has shown how quickly reputations can be restored, but a fragmented reopening is a key risk for Australia

Australia will need to deploy a clear and consistent message very soon if it is to recapture some momentum in 2022. Students, parents and agents will be especially keen to understand the state of government policy in the months preceding each of the major intake dates in early 2022 and mid 2022, and agents will be looking for clarity so that they can advise students on the best course of action. 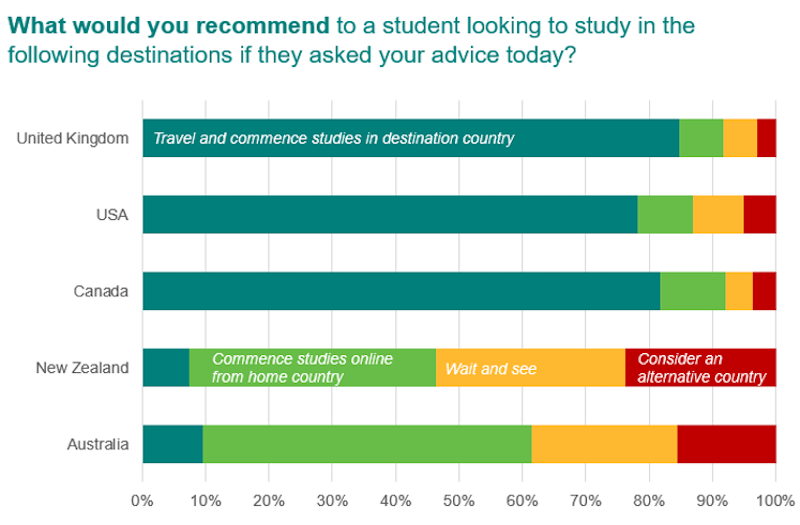 Overwhelmingly, agents are recommending students travel and commence studies in UK, USA and Canada. In contrast, a sizeable proportion of agents (16% for Australia) are recommending students planning on studying in Australia consider an alternative country. On the flipside, the fact that the majority of agents are not suggesting a switch in destination tells us that there is pent up demand for Australian study options and students. There is optimism that when borders open, international students will return.

The United States has demonstrated that it is indeed possible for a destination country to achieve a substantial turnaround in its reputation. Immediately following the start of the Biden administration, the March 2021 Navitas Agent Perception Survey detected a substantial 24 percentage point improvement in views on whether the government’s handling of the pandemic had made it a more attractive destination. This upward trajectory has since improved with perceptions about “safety and stability” and “openness” also seeing a marked jump in the October 2021 survey.

It is critical that Australia has a clear and consistent message about the safe return of international students, in time for students to start their studies in 2022. Navitas expects some policy clarity to come from the Australian Government in the coming weeks. This will provide greater certainty on the requirements and timeframes for students to return to Australia for agents, students and their parents.