The third round of Navitas Agent Perception Research is the most comprehensive to date, capturing opinions of more agents in more countries on the impact of COVID-19 on international education.

In May 2020, Navitas asked its agents to reflect on the relationship between the handling of the coronavirus pandemic by different countries, and the extent to which this made a country a more attractive study destination. We found that countries that had handled the health crisis well (Australia and New Zealand) were perceived to be more attractive study destinations and vice versa.

In September 2020 Navitas repeated its research, finding that governments’ handling of the pandemic had become less of a differentiator for destination countries – Australia and New Zealand had fallen behind while the United Kingdom was the stand-out performer.

Our most recent research in March 2021 reveals that perceptions of Australia and New Zealand have become more entrenched, while the United Kingdom and Canada continue to look poised for a rebound and the US shows signs of a remarkable turnaround.

This most recent round is our most comprehensive sample of agent perception, capturing the views and opinions of nearly 900 agents in 73 countries around the world. Look out for the second part of this report which will consider variations in perception and outlook in different source country regions.

The latest Navitas research reveals a deepening gap between the front runners and the laggards.

Countries, particularly Canada and the United Kingdom, that were ahead of the pack in September 2020 continue to improve their reputation as an appealing study destination, whereas those that remain constrained by closed borders are falling even further behind. On the measure of whether there has been more interest in an education destination, Canada and the UK are pulling ahead with +19 point and +10 point improvements in their scores respectively. At the other end of the spectrum, Australia and New Zealand have fallen to the bottom of the table having lost 11 points and 17 points respectively.

Fig E1: “Over the past two months, there has been more interest in this country as an education destination compared to other countries.” Change from Sept 2020 to     Mar 2021 (agree/strongly agree) 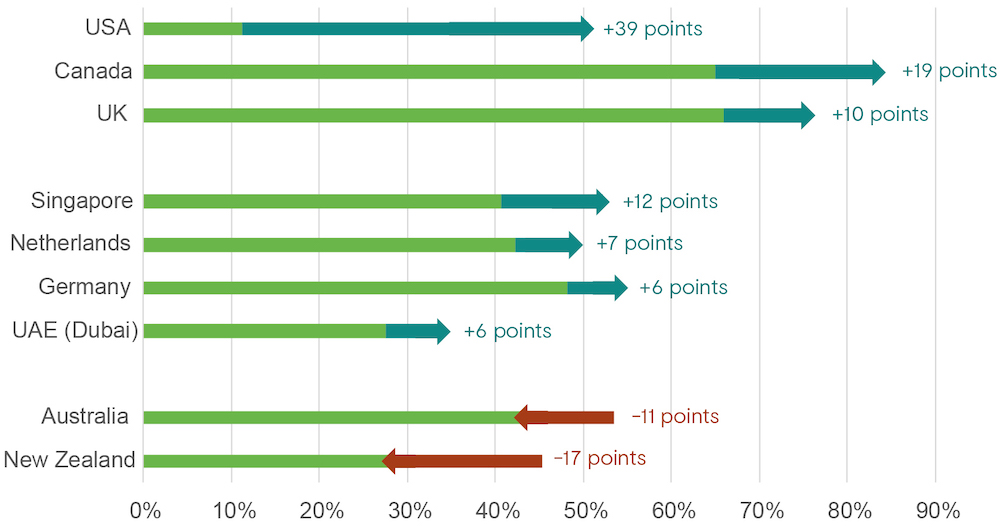 However, reputations can change quickly when countries are seen to be taking the right action

The United States, which was at the bottom of the pile across all measures in both our surveys in 2020, bucks the trend of entrenched views. In fact, it has had a remarkable change in fortune, and is now chasing Canada and the United Kingdom in terms of being perceived as open and welcoming. The United States is now considered by agents to be more open and welcoming (51% agree/strongly agree) than either Australia (30%) or New Zealand (30%).

Singapore, which is proving itself to be an exciting emerging market for global education, has also demonstrated how quickly countries can rise to prominence as study destinations in this climate.

Agents are realistic about the very low likelihood of international students arriving in Australia or New Zealand this year, with just 4% saying they were ‘almost certain’ that students would be able to travel in the second half of the year.

While Canada and the UK are very well positioned, agents are by no means considering travel to those countries as a sure thing. On our assessment, the UK is looking highly prospective for a full reopening to international students in the autumn, but even in that case, many agents rate travel as only being possible (27%), unlikely (3%) or very unlikely (2%).

Fig E2: Do you expect students to be able to travel to the following destination countries in the second half of 2021? 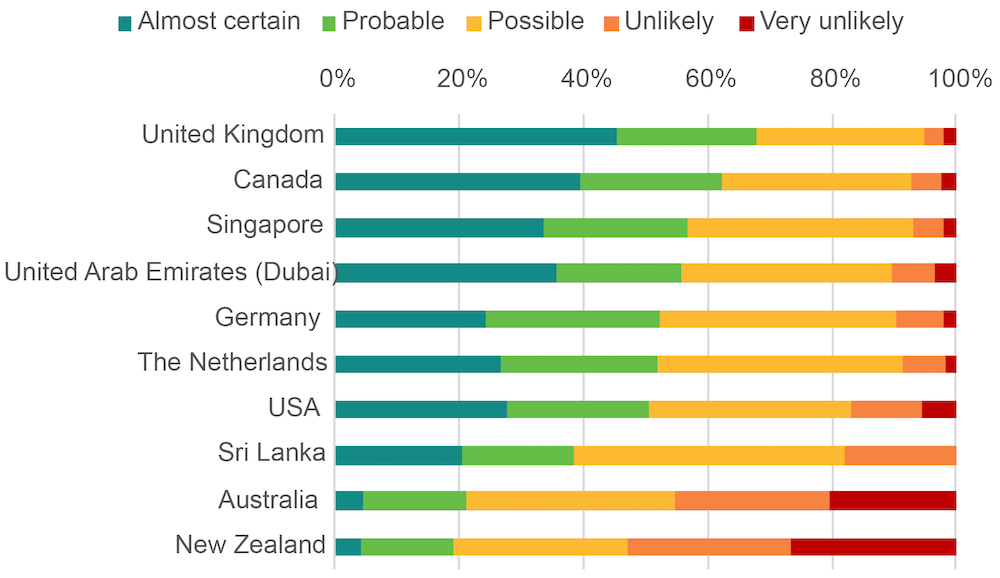 As COVID-19 runs its course, students and agents will pay less and less attention to case counts when judging a country’s response and reputation

While Australia and New Zealand continue to be perceived as ‘safe and stable’ due to their elimination strategies and very low case numbers, this perception is increasingly irrelevant to a country’s reputation as a study destination. As the figure below shows, there is a clear decoupling between increasing interest in a given study destination, and the number of cases. While there was a weak relationship between the case counts and survey responses in Sept 2020, this relationship has more or less disappeared altogether in March 2020.

In our most recent survey, we are also seeing countries that are still facing high numbers of COVID-19 cases, particularly Canada, improving their reputation for safety and stability, and increasing the level of interest in their offering as a study destination.

Fig E3: Relationship between confirmed COVID19 cases (7-day rolling average) and proportion of agents that agree/strongly agree that “Over the past two months, there has been more interest in this country as an education destination compared to other countries.”