Canada started off the pandemic riding high, with almost three-quarters of agents agreeing/strongly agreeing that the government’s handling of the pandemic had made it a more attractive study destination back in May 2020.  At that time, the United Kingdom was in the throes of the pandemic crisis and trailed far behind, but has since steadily closed the gap.

In the latest Navitas Agent Perception survey, 79% of agents agreed/strongly agreed that Canada’s handling of COVID-19 had made it a more attractive study destination. The UK was not far behind with 75% of agents agreeing/strongly agreeing with that statement, up from 60% in March 2021. Figure 1 tracks the progression of the UK’s improvement on this measure over four waves of the Navitas Agent Perception Survey. 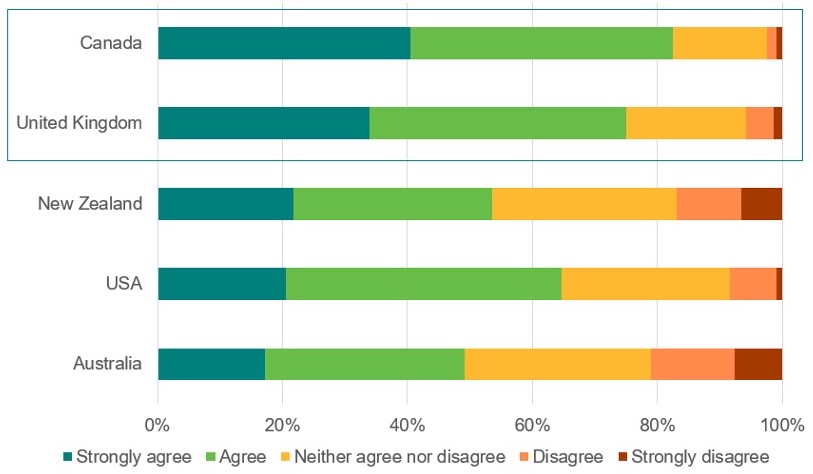 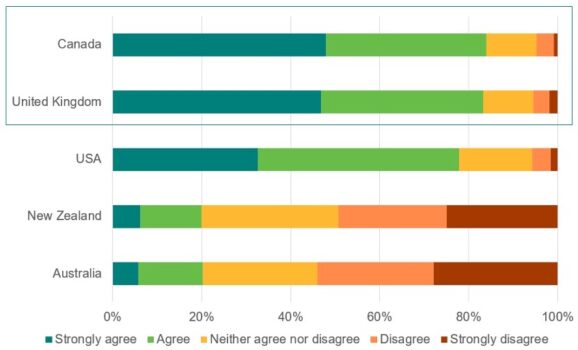 Given the timing of the latest wave of the Agent Perception Survey, which was out in the field in late September-early October, these strong and timely results would suggest that Canadian and British institutions would have done well in terms of international student recruitment at the start of 2021-22 academic year. Navitas analysis of visa data from Immigration, Refugees and Citizenship Canada (IRCC) and the UK Home Office provide clear evidence that both countries have recovered to — and to some extent exceeded — pre-pandemic levels of student arrivals.

While the UK and Canada are in tight competition, they are not necessarily competing for the same students

At face value, Canada and the UK look somewhat equally positioned on the world stage. In fact, there are meaningful differences that become apparent when we look at their key international student source countries.

With over 1,000 responses from 77 countries, the large respondent base of the Navitas Agent Perception survey allows deeper interrogation of these results at a regional level.

On the question of “How attractive are the following study destination to students from your country/region?”, Figure 4 shows the share of agents who selected “Very attractive” for the UK and Canada across different regions.

Figure 4: How attractive are the following study destinations to students from your country/region?  (Share of respondents who chose “Very Attractive” for the UK and Canada). 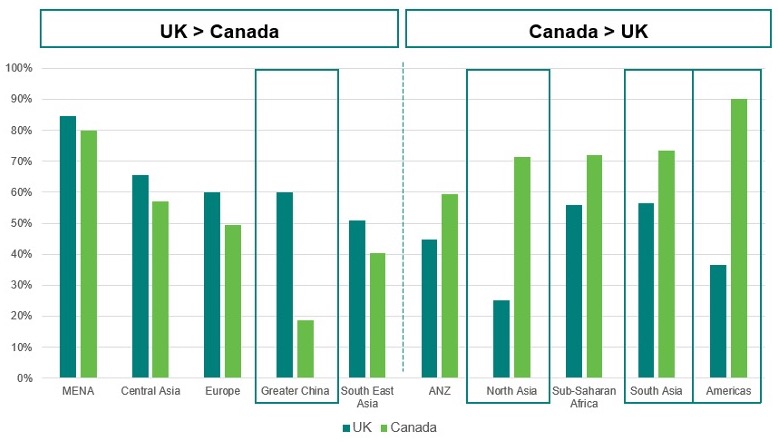 Visa data shows that the recovery in student flows out of South Asia is well underway for both UK and Canada. However, flows from the Greater China region have not yet bounced back. In this respect, the strong preference in this region for the UK would suggest that the UK is in a better position for sustained post-COVID growth. The challenge for Canada will be to better reposition itself as a desirable destination in the minds of agents, students and parents.

In the medium-term, both Canada and the UK will need to be especially cognisant of how the resurgence of the USA might have significant knock-on effects on their relative attractiveness.

In the longer-term, future international student growth will be concentrated in the emerging markets of Africa and Latin America. It is early days yet and Canada’s present attractiveness will likely see significant competition from not just the UK, but all study destinations, both established and emerging.

In the more immediate future, the emergence of the COVID-19 Omicron variant suggests that it may still be too early to assume that 2022 will have any semblance of normality in international education for students, parents, agents and institutions alike.

About The Author Paul Lovegrove

Paul joined Navitas in 2015 and has overall responsibility for establishing new partnerships and overseeing all University Partnerships operations in Europe. Paul is responsible for determining the strategic direction of the division, overseeing the quality of delivery and ensuring a focus on efficiency. Paul has a deep and intimate knowledge of international higher education and pathways markets in the United Kingdom gained during his two decades of employment with Study Group in a diverse range of roles. Across his career, Paul worked his way from a teacher to Director of the pathway division, and established trusted and strategic university partnerships with over 18 higher education institutions – 12 of which he personally led the set-up of. Paul holds a LLB from John Moores University, an MBA in General Management from the University of Brighton and a MA, Research from the University of Brighton.