The UK leapfrogs Canada in expectations of market share trends

The first Navitas agent survey conducted in May 2020 revealed that Canada looked to be the clear post-covid winner in the race to attract international Students. In the latest Navitas survey, the tides have turned in favour of the UK, although substantial uncertainty remains.

In September 2020, agents were once again asked to provide an estimate of the percentage of their clients who enrolled to study at different destinations in 2019, and for a corresponding figure for 2020. (They were specifically asked to think beyond just Navitas students and to think about all students that they serve.)

A key strength of the question was the focus on the agents’ own clientele, not the wider market. This allows the analysis to generate an aggregated expert view, drawing on the wisdom of a diverse, independent, decentralised and informed group.

Compared to the May result, the September response to these questions shows a stronger swing away from USA and Australia, and a stronger swing towards the UK. The outlook for Canada is neutralised back to pre-pandemic levels.

As the figure below shows, there is a further deterioration in terms of loss of share projected for USA. It remains to be seen whether a successful transition to the Biden administration and rapid remediation of anti-immigrant policies can have a substantial effect in turning around a longer term-trend which saw new student enrolments in the USA peak in 2015-16 (IIE 2020). 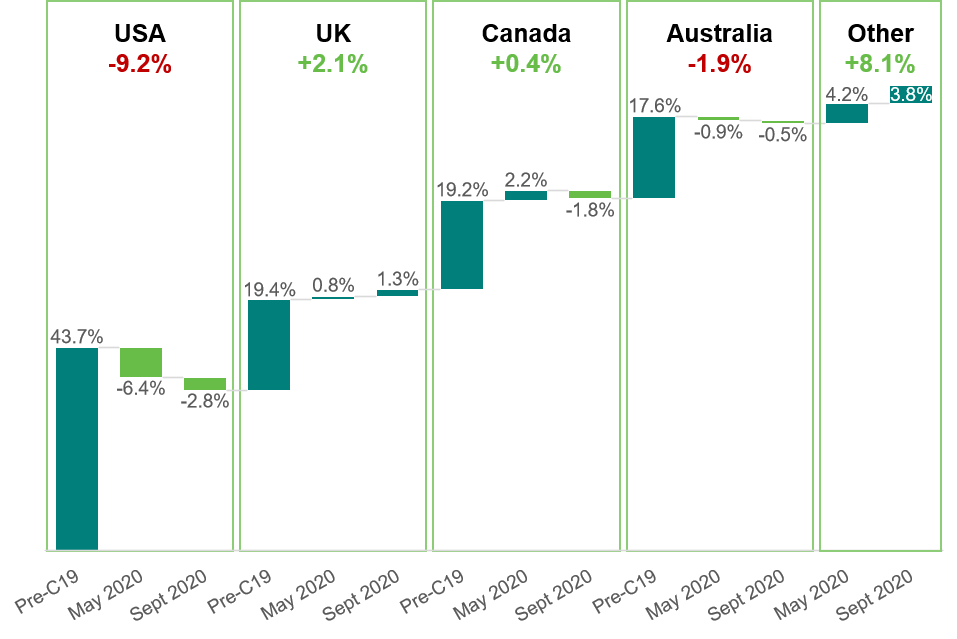 Despite having momentum in early 2020, Canada will only do enough to maintain its current market share

While Canada was seen to be the clear winner and expected to pick up the most market share earlier in the year, agents are now predicting a reversion to its pre-pandemic share. As discussed, in our previous publications, Canada has been a consistent performer on most dimensions of the Navitas agent survey, often coming in second only to the UK. As the chart below shows, agents appear to be concluding that Canada is doing all the right things to maintain its market position, but is not necessarily doing enough to pick up any substantial market share in the volatile environment. It is important to note that these expectations were formed prior to the 20 October announcement that Canada was re-opening to international student travellers.

The UK is in the ascendency with the ability to travel being highly valued, and underpinned by pre-pandemic attractiveness and effective policy implementation

The UK is doing substantially better in this round of the Navitas Agent Survey on every dimension, and especially on the all-important assessment of students being ‘able to travel’ in the first half of 2021. Two points from our prior analysis are worth reiterating. First, it is very likely that the UK’s performance, underpinned by its pre-pandemic momentum (resulting from its reinstatement of post-study work rights), will result in market share growth mid-pandemic. Second, being the number two most popular study destination overall and positioned in the Northern hemisphere, the UK has also been best placed to capitalise on any loss of market share by the United States.

More recently, it has become apparent that the UK is also extending its lead by getting the logistical and administrative details of policy implementation right. The fact that UK Visas and Immigration appears to be exceeding previous years’ service levels for visa application turnaround times is one important example of how the UK is improving its reputation of being open and welcoming. The availability of flights is another example; at the time of writing official statistics showed 12,000 border crossings into Australia in Sept 2020, 21,000 air passenger arrivals into Canada in August 2020, and 1.26 million air passenger arrivals into the UK in July 2020.

Australia is being marked down due to a lack of certainty around border re-opening and mixed messages on pilot programs for international students.

Greater uncertainty is creeping into the market, with a doubling of the proportion of students that agents perceive to be ‘not yet committed’ to a particular destination

It is important to note that the proportion of market share that agents consider to be uncertain has increased since the last survey. Previously, agents were unsure of how to allocate approximately 4% of market share. That figure has now risen to 8%, consistent with research from IDP and QS that show that the proportion of students willing to switch from their initial destination of choice is steadily increasing.

In a constrained international education landscape where barriers to inbound travel remain in place and outbound student flows will remain depressed for at least the next 12 months, countries and institutions need to recognise the importance of maintaining student interest and commitment, while also offering a complete value proposition to attract the attention, interest and ultimate enrolment of those several hundred thousand students that are not yet committed to a particular study destination.

You may also be interested in further insights on student flows.