The Navitas Agent Perception surveys in May and October 2021 showed that the US, UK and Canada were well positioned to commence their post-pandemic recovery in international student flows. Visa data from those countries for 2021 subsequently confirmed that a strong, v-shaped recovery commenced in the northern hemisphere in 2021, while Australia and New Zealand kept their borders closed.

The October 2021 agent survey indicated that at the time, only 30% of respondents believed that the Australian government had a clear plan to welcome students back. Many in Australia were surprised by the news that international students would be able to enter the country before the end of 2021 when it was announced; with most anticipating closed borders for many more months, possibly even stretching into the second half of 2022.

After a few false starts, Australia began welcoming students back on 15 December 2021. Although too late to have a significant impact on the January/February 2022 intake (normally Australia’s largest intake), this re-opening has created a marked shift in sentiment amongst institutions, agents and students alike. Universities and colleges have seen many green shoots and have been buoyed by the opportunity to reconnect with students, colleagues, and partners across the international education sector at conferences, exhibitions and of course on-campus.

The latest Agent Perception Survey reflects a strong shift in mood amongst international education agencies globally. The 700+ agents agree: Australia is bouncing back! Almost three-quarters of agents (73%) agree that over the past two months there has been more interest in Australia as an education destination (up from a low 28% in October 2021). Australia has substantially closed the gap with Canada and the UK on this measure.

“Australia’s mid-year intake has seen significant numbers of international students travel to Australia to commence or resume their studies. The excitement and energy on campuses across the country augurs well for further recovery and the recent agent research confirms this shift in sentiment. With >95% of the adult population fully vaccinated, COVID-safe protocols still in play and huge advances made in flexible delivery across the sector, Australia is well positioned to win back market share.”
Neil Fitzroy, General Manager, Global Recruitment UPA, Navitas

Figure 1: Level of agreement with the statement, “Over the past two months there has been more interest in this country as an education destination compared to other countries.” – October 2021 versus May 2022

Consistent with patterns seen in the October 2021 survey, this recent increase in interest is most strongly driven by South Asia and South East Asia; over 90% of respondents from these regions agreed that interest in Australia as a study destination has increased in recent months. Whether such strong interest will translate to large student flows will in part depend on the rate of visa processing.

Figure 2: Regional breakdown of the level of agreement with the statement, “Over the past two months there has been more interest in this country as an education destination compared to other countries.” (% Agree and % Strongly Agree across survey rounds) – October 2021 versus May 2022

Throughout the pandemic, our agent perception research has been tracking attitudes towards the key education destinations. At the start of the pandemic, Australia’s swift response to the Covid pandemic, was praised by agents and it was perceived to be the most attractive education destination by agents. In our July 2020 survey 88% of agents perceived Australia as attractive, and in March 2021 this share rose to 92%. At that time, the UK and the US had lost appeal, particularly in relation to safety and stability, as a result of their poor pandemic response. However, Australia started to lose its shine as early as September 2021 and while other countries rallied to protect their international education sectors, Australia’s remained closed for business. Perceptions of Australia continued to plummet, reaching their lowest point towards the end of 2021.

Now the tide has finally turned. Apart from an increase in interest, there has led to a dramatic improvement in perceptions of Australia as “Open and Welcoming” (20% to 80% in this round) and “Safe and Stable” (49% in September 2021 to 81% in this round), closing the gap with Canada and the UK.

Figure 3: Improvements in agent perceptions of Australia’s handling of COVID, and its reputation for being ‘Safe and Stable’ and ‘Open and Welcoming’ 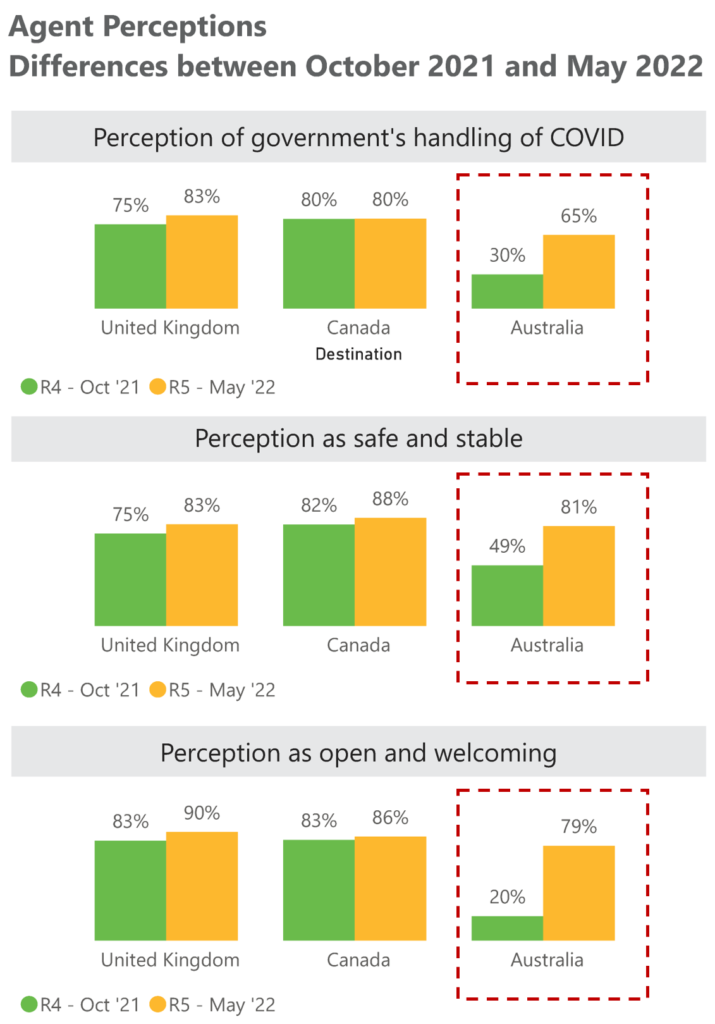 Australia has remained closed to international students for almost a whole additional year compared to the UK, Canada, and the US. It has thus joined the race to recovery late, which may have some negative consequences for its lost market share and diminished market advantages for the period during which it was closed. But for now, institutions, agents and most importantly students, are celebrating the fact they can once again choose to study in Australia.

“These are green shoots, but there remains a long road ahead before we can put the last 24 months behind us, and students’ parents, sponsors and agents are hoping to see their plans come to fruition. There is cautious confidence amongst those in Australia, as well as those wishing to travel here, that we’re back in business.”  Neil Fitzroy, General Manager, Global Recruitment UPA, Navitas