Singapore’s appeal is underpinned by a myriad of factors

Singapore has long been seen as a contender destination for international study, with the potential to rival the five major anglophone countries. There are a myriad of factors that underpin the island nation’s appeal.

Singapore offers widespread courses with English-medium instruction (EMI) given that English is in fact the de facto lingua franca and main language. It punches above its weight with more than its fair share of highly-ranked domestic and foreign universities. It is geographically central and thoroughly multicultural, multi-ethnic and multi-faith.

Singapore is of course a highly-successful, knowledge-based economy with decades of stable government since independence. All of these factors contribute to an enviable thriving, cosmopolitan environment bundled in a safe, accessible and compact footprint.

It is for good reason Singapore is ranked 20th in the QS Best Student Cities 2019, flanked by New York and Barcelona no less.

Singapore ranked third for handling of COVID-19, fourth for safety and stability, and third for openness

The Navitas survey of agents included questions pertaining to the ten countries within which Navitas operates university partnerships. In addition to the primary anglophone destinations, agents were also asked to provide responses for Singapore, Germany, the Netherlands, UAE and Sri Lanka. Agents were only asked to comment on any countries about which they were sufficiently well-informed.

Although many more agents were able to comment on the likes of Australia and the UK (747 and 687 respondents respectively), the scale of the March 2021 Navitas agent survey provided substantial numbers for destinations like Singapore (274 respondents).

Figure 4.1 shows the relative rankings of the 10 destinations included in the Navitas agent survey on the three key dimensions of the government’s handling of the pandemic, the country’s reputation for being safe and stable, and the country’s reputation for being open and welcoming. The table shows that Singapore performed admirably, third for the handling of COVID-19, fourth for safety and stability, and third for openness.

Figure 4.1: Rankings for handling of COVID-19, safe and stable, and open and welcoming

One of the concluding questions in the Navitas agent survey assesses changes in the level of interest in different destinations. The proportion that agree/strongly agree that there has been increased interest in Singapore as an education destination has grown from 41% in September 2020 to 52% in March 2021.

Whether or not the current interest in Singapore will be sustained remains to be seen. Interest is particularly strong from China and South East Asia, and less so from South Asia.

In some ways, Singapore’s strong performance during COVID-19 has not been unexpected. As a destination with many branch campuses — for example, the Curtin Singapore campus operated by Navitas — it provides a valuable transitionary option and viable alternative for students intent on studying in places like Australia and New Zealand while those borders remain close. The big question is whether this COVID-inspired uptick in demand will translate to a longer-term shift in international student preferences towards the Lion City.

Figure 4.2: Proportion that agree/strongly agree that there has been more interest in this country as an education destination in the last two months – March 2021 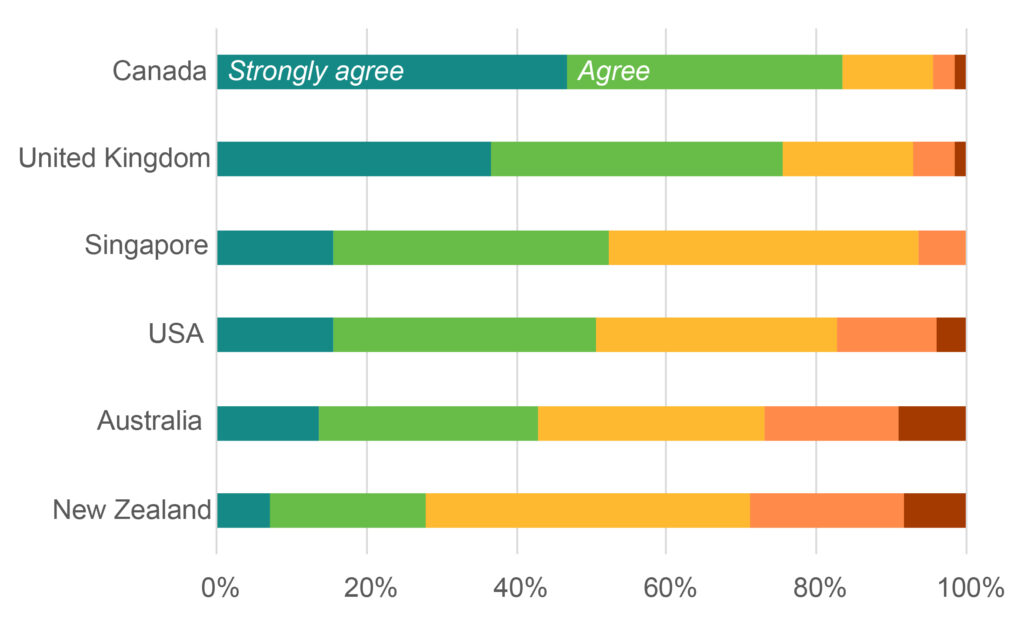 “Singapore has in some ways been here before. Between 2009 and 2011 when Australia temporarily fell out of favour as an international study destination, enrolments in Singapore grew from trimester to trimester. That growth spike burnt brightly and quickly and was not sustained when Australia recovered. The pandemic will pass but perhaps a return to political normalcy will take longer which might give Singapore time to strengthen its foothold.” — Yu-Gin Teo, College Director and Principal of Curtin Singapore.

About The Author Bev Hudson

Bev has been working in international education for thirty years in four countries. Prior to becoming CEO of University Partnerships, Australasia in July 2018, she was working for Navitas in North America for 12 years across a number of roles including: College Director and Principal at Navitas’ first pathway program in North America; Fraser International College; General Manager for Navitas Canada and as President and CEO of University Partnerships, North America. Her current responsibility is to manage all University Partnerships operations in Australasia as well as being responsible for determining the strategic direction of the division, overseeing the learning and teaching direction to ensure the quality of delivery and strong student outcomes. Bev has been involved in all aspects of international education including curriculum design, student services, faculty and administration. She has developed and implemented the strategic vision for internationalisation at several universities including internationalising the curriculum, international recruitment and marketing, student support, and international partnership development. Bev received her Master of Education from Edith Cowan University. In 2014, she was awarded the International Education Distinguished Leadership Award from the British Columbia Council for International Education.