Long-COVID: Australia and New Zealand face a drawn out recovery

Findings from the Navitas Agent Perception Report in March this year showed a clear and deepening gap between the northern hemisphere (UK, Canada and USA) which is perceived as being both safe and stable, and open and welcoming for international students; and the laggards in the southern hemisphere namely ‘Fortress Australia’ and New Zealand, whose continued border closures have left them trailing behind. We expect this gap to have widened in our next Agent Perception Survey, which was recently in the field.

The strong interest in open countries like Canada and the UK is leading to increased switching behaviours on the part of international students, as revealed in the ongoing QS Coronavirus Student Survey. The proportion of students that no longer want to study overseas is low and trending down. The bulk of students are telling us they prefer to defer or delay, and a third group of students, considering choosing a different study destination, now accounts for one in five students.

Source: QS Impact of coronavirus on global higher education (n = 66,000, Feb to Aug), QS September 2020 and beyond (n=3,000, Sept), QS Higher Education In 2020: How Covid-19 Shaped This Year (Feb to Nov), Evolving education amidst crisis: The perspectives of international students (Jan to Mar)

This pattern from the QS survey is entirely consistent with findings from our last Agent Perception report which revealed that agents are advising students who had planned to study in Australia, to switch countries or hedge their bets by applying to study in multiple destinations.

The fact that students are deferring and switching as opposed to cancelling, tells us a lot about the shape of the recovery to come.

The impact of Covid-19 will generate four types of trajectories for different industries.

As the Nobel Prize-winning economist, Thomas Schelling famously said, “There is a tendency in our planning to confuse the unfamiliar with the improbable.” The sharp-dip and catch-up rebound first appeared both unfamiliar and improbable, but more recent data would suggest that this will be the likely result for the UK, Canada and USA.

There is evidence that a catch-up rebound is underway

Evidence, including the ‘defer or switch’ trend mentioned above, suggests that pent-up demand does exist, and we are already seeing a sharp rebound in enrolments in Canada and the United Kingdom.

Recently published information from IDP shows that volumes of IELTS testing (a pre-cursor to international study) have rebounded strongly, returning to pre-Covid levels in December 2020, and sustained since then. IDP also reported that web traffic to the many portals it operates has also now rebounded to exceed pre-Covid levels.

It goes without saying that not every country will benefit from the sharp rebound and pent-up demand released through a catch-up rebound. The reality is there are some very clear differences in government policy, vaccination roll-outs and economic performance across the various study destinations. Canada and the UK have had very optimal conditions for the past few months now in terms of vaccination rates, reduced quarantine requirements and availability of flights. Australia is gradually softening its stance on international borders, but as it stands today, will still be reliant on restricted models such as pilots and bubbles for international student arrivals.

Visa data from the three countries shows that the UK has had a clear head start over Canada and Australia is lagging behind with visa grants in the first half of 2021 down 18% on the same period last year, and 61% on the same period in 2019. Canada is doing well and is 4% up on pre-pandemic levels for study permits being issued. The UK visa data reveals a very strong recovery underway with a 162% increase in sponsored visas being granted since 2020 and 34% up on pre-pandemic levels. 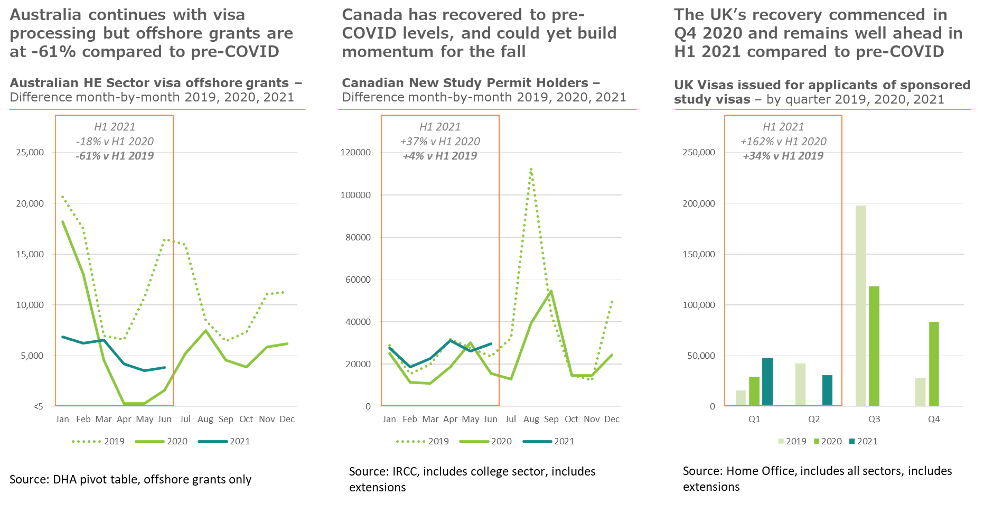 The perceptions of over 1,000 agents shows these trends are not abating

Since the start of the pandemic, the Navitas Agent Perception Survey has provided insight in to market sentiments surrounding the perceptions, policies and positions of different destinations.

Almost 12 months ago, it was clear that agents (and by proxy students and parents) were becoming less and less concerned about case counts and increasingly more focussed on which destinations were open and welcoming. There was a clear paradox with Australia and New Zealand being perceived as very much more safe and stable having achieved zero-COVID, but at the same time not at all open and welcoming given borders being tightly shut.

In our latest survey, there has been a concerning new development for Australia and New Zealand as even their prized safe and stable rating has started to slide. Having led on this measure for the last 18 months, Australia and New Zealand are now no longer considered as safe and stable (~50% agree/strongly agree). Even the USA, with its high pandemic fatality rates, is now seen as more safe and stable than Australia or New Zealand. There could be a number of reasons for this change in Australia’s case. For one, the Delta variant has led to a new wave of infections across New South Wales and Victoria and while the vaccine rollout is now well in train, for many months Australia was admonished for being amongst the worst in the world.

Since the beginning, Australia and New Zealand have not been seen as open and welcoming. On this measure, the gap with Canada and UK is now the widest it’s ever been.

The extended period of border closures will have long-term effects

The prolonged closed borders of Australia and New Zealand (likely to be at least two years in duration before reopening), will possibly result in longer-term implications for their competitiveness on the global stage. There are at least five factors that could deepen the Southern Hemisphere downturn beyond just 2020 and 2021 – our prediction is that Australia and New Zealand will potentially suffer from long-COVID.

The first factor is a reduction in capacity within the international education sector to serve international students – Australia has already seen the closure of colleges that cannot sustain next to no new international students and declining revenues; and we know that institutions, including universities, are scaling back or consolidating their program offering. A recent survey of the independent sector highlights the potential for more closures to come and reports of universities restructuring continue to mount.

The second factor is the resulting transfer of capability away from Australia and New Zealand  – we know that for every academic or professional staff member that has to leave an institution, there is a UK or Canadian university ready to pick them up, along with their expertise, knowledge and global networks. This is especially the case for international office staff and key representatives in offshore locations.

The third factor is the temporary loss of some significant advantages Australia in particular previously enjoyed. A good example is the previous existence of Australia-specific counsellors at different agencies around the world – those counsellors are now being retrained to redirect students to the Northern Hemisphere where there are viable options.  The loss of that specialisation will be permanent.

Fourthly, we know that many students base their decisions on where to study on a number of ‘generational’ factors – for every intake that we miss, we’re also missing out on siblings and cousins in future years.

Finally, it is possible that Australia and New Zealand’s current reputation for being less than hospitable will have a lingering bad taste.

The impressive performance of Australian universities has been at least partially funded by international student fees so it’s fair to expect that there will be a lag effect on university rankings as research and other activities get curtailed by the reduction in international student revenues. On the other hand, we can expect universities in other parts of the world to benefit from the redirection of students to their destinations and eventually for that change in fortune to be reflected in the university rankings league.

Five factors will deepen the Southern Hemisphere downturn beyond just 2021 – Australia and New Zealand will suffer from long-COVID.

There will likely be a two-speed recovery whereby the Northern hemisphere benefits from the southern hemisphere’s disadvantage in what will essentially be a zero-sum game.

That’s not to say that Australia and New Zealand won’t recover. With clear and publicly-stated intentions around welcoming students back to Australia in the near future, efficient visa processing and favourable policies around post-study work rights, Australia could turnaround its fortunes sooner than expected.

Note: This article is based on a presentation for the UUKi webinar ‘Enabling International Strategies’.